Manchester United today confirmed that the club has raised more than £500 million on the bond market, which will pay down the principal debt owed to several international banks. The bond, issued in two blocks of £245.22 million and $416.78 million, will attract interest repayments of £45 million per year that could cripple the club, warn city experts.

The bond will remove restrictive covenants placed on the Glazer family’s ownership of the club, enabling the Americans to draw significant amounts of cash out of the club over the next seven years.

The prospectus used to market the bond last week revealed that the family will remove up to £127 million from the club in the coming year. Further club cash will pay down the so-called Payment in Kind loans that will attract an eye-watering 16.25 per cent interest from 1 August 2010.

A spokesman for the family claimed the deal brought “transparency” to United’s finances, although no comment was forthcoming on the revelation that the club will haemorrhage £565 million over the next seven years in dividends, interest and management fees (see table).

The coupon rates on each tranche of the debt is 8.750 per cent and 8.375 per cent respectively, which will bring a yield of nine per cent to investors. Early trading saw the bond dip in value on the New York market, although there is little information to date about who bought the senior notes offering. 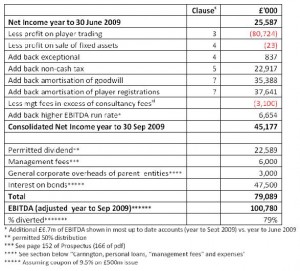 However, David Bick, a financial analyst, said that in the long-term the bond is “very bad news for the football club” because of the amount of money that will leave the club in dividends and interest.

“This is better news for the Glazers because it pushes back when they have to repay the debt to 2017,” Bick told Sky Sports News.

“It’s not good news for the football club because when you look at the details, the Glazers will take interest and dividends out of the club. It means that the manager will have less money to spend.”

United’s executive team, including Managing Director David Gill, held investor meetings in London, New York and Asia in the past week to drum up interest in the note issue, which has been over subscribed.

“It’s been over-subscribed because the interest rate is way above the underlying interest rate in the market at the moment. But if the manager doesn’t, in the long run, have sufficient resources to compete with Chelsea, Real Madrid and Barcelona inevitably they will decline,” added Bick.

“Old Trafford could be sold to help pay down the debt but if they do that they’ll only add to their operating expenses and will have still less money for the manager to spend on the playing squad.

“Ultimately its almost beyond argument that clubs must spend money, and if they are constrained they will run the risk of dropping out of the top four.”

A chilling thought for all United’s supporters.

For those of a financial disposition, the full bond details are as follows: