A small club with a small mentality

Sir Alex Ferguson broke his relative silence on Manchester City’s controversial city-centre poster campaign with an outspoken attack on the Eastlands outfit. Ferguson hit out at City’s spending, their mercenary players and that Carlos Tevez poster – branding the club a “small minded and arrogant.”

While Fergie doesn’t normally pick fights with clubs that pose no threat, he has clearly taken exception to a Deansgate poster that proclaimed “Carlos Tevez – Welcome to Manchester.” Manchester City fans, who have waited 34 long and bitter years for a trophy, have often found amusement in the fact that Old Trafford is located in Stretford, and the club itself paid for the prominent billboard. 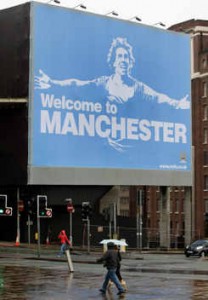 “That billboard really is City, isn’t it?” said Sir Alex ahead of today’s 8-2 victory against Hangzhou in China. “They are a small club with a small mentality. All they can talk about is Manchester United. That’s all they have ever done and they cannot get away from it. That is stupid. That arrogance will be rewarded in the right way. It’s having a go at us.”

“I don’t look on City as my biggest challenge. They think taking away Tevez is a triumph. It is poor stuff. I thought a long time ago that he would go to City. Now I don’t have to deal any more with players who are miserable because they are not playing. I have good professionals here.”

Another player prone to throwing a strop is Emmanuel Adebayor, the former Arsenal striker, who signed for City in a £25 million deal last week. The deal was delayed despite a fee being agreed amid rumours that Adebayor had been offered to United. A rumour confirmed by Ferguson, who revealed that Adebayor had all but begged to join another Champions League club before joining City.

“At the last minute, from what I can gather, either Emmanuel Adebayor or his agent phoned us after they had agreed a deal with City and then did the same with Chelsea. He was desperate to get to either Chelsea or us.”

Ferguson also attacked City’s spending on wages, which have attracted Tevez, Adebayor, Robinho and Gareth Barry to the club. While each of the four has claimed ambition and trophies were behind their moves, the club hasn’t come close to winning any silverware this millennium.

“When someone offers you that kind of money, it’s a big attraction to people nowadays. That is the reason they have gone there. Do you know what City’s biggest triumph is? It’s getting those players there. I don’t know if they will do anything with them. It is not easy to get into that top four so the biggest success of all is to just get the players there.”

“There will be three teams to beat. Ourselves, Liverpool and Chelsea will be very close together.”

It was a surprisingly dismissive attack by the United manager but only reflective of the fans’ view, who regard City with little more than pity, despite the club’s new found wealth. After all, you can take the petro-dollars out of Abu Dhabi but you can never take the Bitter out of City.

Or as RoM might put it, pity the fools…

Pity the fool, courtesy of www.republikofmancunia.com

3 thoughts on “A small club with a small mentality”