It recalls that classic Fawlty Towers episode. You know the one, where Basil does everything he can to ‘not mention the war’ as a group of German tourists visit his ramshackle hotel. Except, of course, the bit about not mentioning the war. Sir Alex Ferguson appears to have heeded that particular, if farcical, lesson this week, writing to fans attending the FA Cup fourth round tie with Liverpool at the weekend to appeal for good behaviour.

Fair enough one might think, with the tie likely to be even more tense than usual, and supporters’ groups keen for a full ticket allocation to be restored at Anfield. Curious though that Ferguson chose to complete the letter, sent to just over 5,000 fans, without a single mention of the Luis Suárez affair. After all, the fallout from Suárez’ racial abuse of Patrice Evra, and subsequent eight match ban, will still be felt at Anfield on Saturday even if the Uruguayan is absent.

Indeed, Suárez is one of the key reasons the tie has been shifted to an early kick-off, with the Football Association calling on the clubs to maintain order.

“FA Cup ties are tense affairs at the best of times,” Ferguson wrote in the letter to travelling United supporters.

“Add in the fact that Manchester United against Liverpool is the biggest game around and it becomes even more so. Your support is vital to the team and down the years that has been especially true at Anfield. But please put the emphasis on getting us into the next round and giving the sort of support you are famous for – positive, witty and loud.

“I wrote to fans attending the away match in October urging them to co-operate with stewards and officials at Liverpool so we can make a strong case for restoring our allocation for future United games at Anfield. The fans did almost everything asked of them that day and as a result, we have a much improved allocation for this important FA Cup tie. Please do everything you can to continue that good work and protect next season’s allocation.”

Ferguson continues, much as he did in October, to demand that United supporters respect local stewards and Anfield’s ground regulations. It’s a short-hand admonishment for those United supporters that neither sit nor keep the gangways clear at away fixtures.

In that narrow sense Ferguson’s appeal is perfectly sensible. Diligent work by supporters’ groups such as IMUSA and MUST, keen to stem a rising tide of reduced ticket allocations at away matches, will only pay dividends when United’s opponents run out of ammunition. Yet, Ferguson’s letter does not quite hit the mark either; not in the current climate, not with the stench of Suárez’ actions still hanging over the tie.

Indeed, the Suárez affair continues to place a strain on relations between Liverpool and United. The Anfield club released a series of inflammatory statements after the lengthy sanction to the Uruguayan was handed down by an FA Regulatory Commission. Liverpool’s repeated briefing of media outlets during the two month wait for a verdict is known to have irked Ferguson. Liverpool went on to slander Evra, accuse the FA of institutional conspiracy, and fail to even partially understand the nation’s mood. It is an episode that has brought shame on a once proud club; one of England’s oldest and most successful teams.

Meanwhile, Evra, United’s captain for the season, is bound to receive the ugliest of receptions at Anfield, all in the name of ‘supporting’ the Frenchman’s abuser. Few on Merseyside, it seems, will understand the irony when the all-too-inevitable barrage of abuse heads the defender’s way.

This is, of course, where Ferguson’s communication with supporters this week falls short. The legendary manager is also likely to dodge questions on the subject during his Friday press conference. Unlike hotel owner Basil Fawlty, Ferguson is simply not going to mention the war.

In reality the match will be dominated by talk of Suárez’ actions and eventual ban. The atmosphere, fuelled by Liverpool’s bloody-minded defence of the striker, is bound to increase tension between supporters. One can only hope that hostility does not extend beyond the verbal, to something far more sinister – much as it did the last time United visited Anfield for a cup tie in 2006.

Meanwhile, Evra will mercifully not face the burden of shaking Suárez’ hand on Saturday lunchtime, with the Uruguayan facing the sixth of an eight game ban. That pleasure will come when the sides meet in the Premier League next month. Liverpool’s players, meanwhile, will likely perform their usual trick of significantly increasing the intensity of performance against United. Few Anfield supporters will recognise the side that lost so tamely at Bolton Wanderers recently.

Which brings us back to Ferguson’s letter. Well meaning no doubt, but ultimately lacking the bite that it might have given the circumstances. 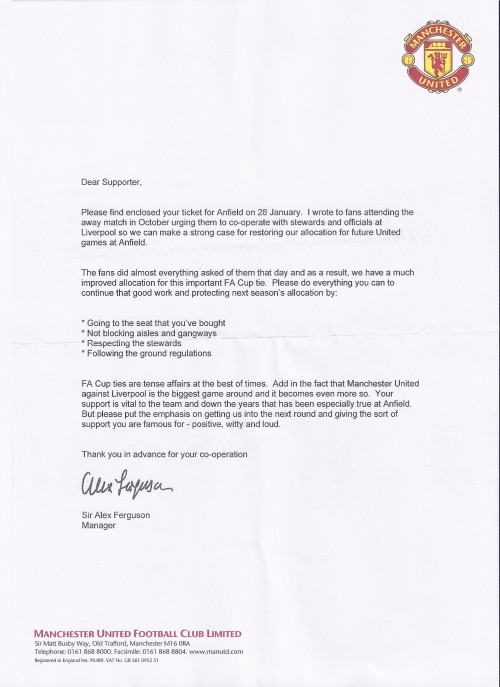 11 thoughts on “Be witty, be loud – just don’t mention Suárez”