Classic United versus City in the FA Cup

In the second of a series of FA Cup related posts, United Rant looks at the history of Cup games between Manchester City and Manchester United down the years.

Nine times the two Manchester clubs have faced each other in the world’s oldest football tournament, with the Reds five to four ahead in wins. Sir Alex Ferguson’s men will be out for some measure of Cup revenge after City won last season’s FA Cup semi-final at Wembley. That victory was part of City’s first major trophy in over 35 years. But along the way each has scored some famous victories in the FA Cup. And while around 80,000 witnessed City’s win at Wembley last April, the first Cup match between the sides was in much more humble surroundings at North Road, Manchester…

The first meeting of the two Manchester clubs was a thumping win for the Heathens, whose mixed early history in the cup has been covered elsewhere on this site. The match was played at North Road, the club’s ground from its foundation in 1878 until 1893, when the Heathens moved Bank Street, Clayton. Fans crowded two newly erected stands at North Road – now Northampton Road – but the ground expansion was to prove a key moment in the club’s history and eventual split from its roots, when the Yorkshire and Lancashire Railway company refused to meet the £2,000 cost of two stands.

The first cup meeting of the sides under their modern names took part on neutral territory in Sheffield in front of a bumper cup semi crowd. United was clear favourite  for the tie under manager John Chapman, with City bottom of the First Division, but as always in football things do not always pan out as expected. The Blues scored three times through, with a Tommy Browell brace and a Frank Roberts goal that sealed a place in the final against Bolton. Thankfully, for despondent Reds, the final was a match City would lose! Perhaps it was the unusual build up, with City said to have prepared with a trip to Buxton, which included games of golf, billiards tournaments and brine baths. United, meanwhile, stayed at the club’s training ground and prepared with “the old-fashioned methods,” according to Reds captain Frank Barson.

Three years before many of the Babes would die at Munich some of those caught in the tragedy, including clubs legends Bill Foulkes, Duncan Edwards and Tommy Taylor, appeared in this loss to City in front of a huge crowd at Maine Road. The fixture came just a week after the Blues had thumped United 5-0 at Old Trafford in the first division, with Matt Busby’s young side outclassed by the cross-town rivals three times that season. But United would finish higher in the table as the era of Red supremacy began. Meanwhile, the Blues went all the way to Wembley, but it wouldn’t be victory for City as Newcastle United ran out 3-1 winners. The Geordies’ last major trophy! 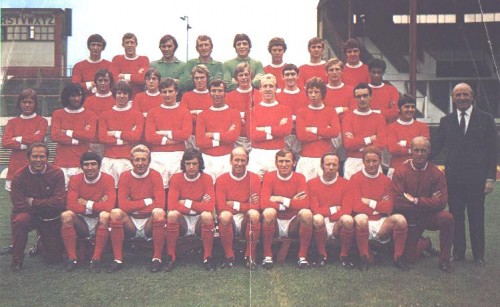 Two years on from United’s glorious European Cup win and the Reds were already in decline under new ‘chief coach’ Wilf McGuinness. No George Best or Denis Law for this one, but a resounding win over old rivals City nonetheless. Brian Kidd, still only 21, hit a brace and Willie Morgan the other to book United’s place in round five – the match when Best hit six against Northampton Town! But with United in poor league form, City manager Malcolm Allison had made much of the Blues chances in this one. It would blow up in Allison’s face in front of a bumper New Year’s crowd at Old Trafford.

Just two months into Alex Ferguson’s tenure at Old Trafford, and along came this massive test for the Scot. For fans and manager alike, losing was not on the agenda. Thankfully, big Norman Whiteside’s solitary goal won it for the home side on a frozen Old Trafford pitch. The match could have gone either way but the Northern Irishman’s smart finish half way through the second period beat City ‘keeper Perry Suckling. Both Manchester club’s would struggle that season, as United finished mid-table – Everton claiming the First Division – and City relegated. The Reds would fail in that season’s FA Cup too, with little Coventry City beating Tottenham Hotspur 3-2 at Wembley in May. 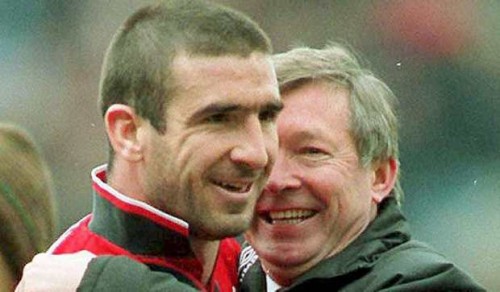 Well on their way to a famous double win, ‘Fergies Fledgelings’ overcame City in this tight fifth round encounter at Old Trafford. Lee Sharpe and Eric Cantona scored the goals to defeat City after the Uwe Rosler’s early goal. Cantona’s penalty provided the controversial turning point, with referee Alan Wilkie pointing to the spot despite City’s protests and media outrage. But in truth United was always on top as Sharpe volleyed in a stunning winner with 13 mintues to go. United would complete the tournament victory with a 1-0 win over Liverpool at Wembley, proving that Ferguson certainly could “win things with kids.” Meanwhile, the Blues were relegated from the Premier League. Not for the first time!

United provided the Cup romance on Valentines Day 2004, with Paul Scholes, Ruud van Nistelrooy and teenage sensation Cristiano Ronaldo scoring the goals to beat the Blues yet again. Defender Gary Neville saw red for headbutting Steve McManaman (who could blame him?), but the dismissal did little to stop the United juggernaut as Ferguson’s side went on to record a comfortable victory. Neville had been accused of diving in an attempt to win a penalty, only to be confronted by the former Liverpool winger. But the Bluies couldn’t capitalise on the man advantage, with United ruthlesss in front of goal, The Reds went on to claim an historic 11th FA Cup win with victory over Millwall at the Millennium Stadium, Cardiff.

5 thoughts on “Classic United versus City in the FA Cup”