“When you purchase other players you get another stimulus in the group and you need that. Our selection is out of balance and we have managed to be fourth in the league but we have to manage to be the champions. So it shall be a rough summer I think for a lot of players.”
Louis van Gaal

With the season drawing rapidly to a close thoughts turn to the summer transfer market; the nation’s back-pages are filled with little but speculation about just where Van Gaal will spend a reported £150 million summer transfer budget. However, much as was the case last summer, when United sold, released or loaned 15 players, a significant proportion of United’s business will involve the Old Trafford exit. It’ll be a lonely walk for some, including a clutch of big-name players. Rant assesses just who might be having a “rough summer” among Van Gaal’s squad. David de Gea not included.

The Colombian joined with much fanfare on deadline-day last summer, with United paying a £6 million loan fee to Monaco and picking up the tab on Falcao’s £265,000-per-week wages. It has proven to be a huge investment for very little return, with the striker scoring just four goals in 29 appearances across all competitions this season, while spending much of the campaign on the bench. There is no doubting Falcao’s commitment or workrate, but that extra explosive sharpness has, sadly, gone. The cruciate knee injury suffered in January 2014 has fundamentally changed the player for the worse. It is has, in truth, been hard to watch Falcao’s descent from one of the world’s truly élite strikers to a man struggling to make any impact at all. There is no chance United will commit a further £46 million investment on the 29-year-old this summer. Chance of departure: 10/10. Fee if sold: n/a.

The Dane has oft said that he didn’t come to United to ‘pick his nose’, although he might as well since there is little chance that Lindegaard will play for the club again. Signed in January 2011, Lindegaard once challenged a callow David de Gea for the number one jersey at Old Trafford. It was a short-lived spell as Sir Alex Ferguson’s preferred stopper. In the end de Gea’s class told and Lindegaard has spent the entire season in the reserves. Even de Gea’s departure will do little for the Dane’s prospects at Old Trafford. A free transfer awaits. Chance of departure: 10/10. Fee is sold: £ free.

What went wrong for Rafael? A United player since 2008, the diminutive Brazilian was supposed to have matured into an international class full-back by now. There has always been much to admire: pace, natural attacking instincts and genuine tenacity in the tackle. On paper the 24-year-old should offer much in an attacking Van Gaal system. Yet, two factors precipitate Rafael’s probable departure this summer. First, the player’s slow burning path to maturity; Rafael is still liable to defensive mistakes that should now be eradicated from his game. More importantly, he is a player who is so rarely fit. Rafael has only once played more than 30 games in a season. It is simply not enough return to be considered a safe bet in Van Gaal’s evolution. Chance of departure: 9/10. Fee if sold: £5-8 million. 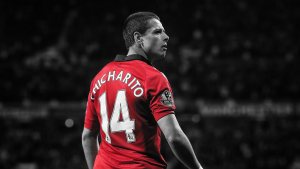 It has not been an easy season for Chichario in Madrid, although a burst of goals towards the end of the campaign has brought the Mexican some cheer. Yet, Hernandez has spent much of the campaign on the bench, just as he did under Moyes last year. Strange that the Scot reportedly refused to use Hernandez as bait to lure Gareth Bale from Tottenham Hotspur in the summer of 2013. Back at Old Trafford Chicho will be granted few opportunities by Van Gaal – a manager who routinely seeks out more rounded strikers. Chance of departure: 9/10. Fee if sold: £8-10 million.

These are strange times indeed if Nani, who has spent the season on loan at Sporting, holds some chance of being recalled to Van Gaal’s squad, albeit a slim one and only because few clubs can afford the player’s extravagant wages. Nani has rarely achieved any consistency through a career that has so often promised much, but delivered only sporadically. Once again the winger has put up good numbers this season at Sporting: 10 goals and two assists. There were also times at United when he was highly productive. Yet, there was never a period when he was reliable. Inexplicably David Moyes pushed for the player to be granted a new five-year, £100,000-per-week, contract last season. He played just 13 times for the Scot. Chance of departure: 8/10. Fee if sold: £8-10 million. 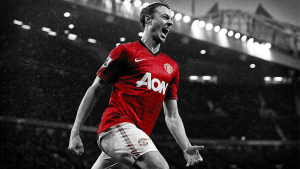 There was a time when one Rant Cast co-host claimed Evans to be “among the top five central defenders in the world.” No, we couldn’t understand it either. Still, everybody is allowed the odd mistake! The trouble with Evans is that it’s almost every game and, at 27, the Northern Irishman is no longer the inexperienced kid returning from a loan spell at Sunderland full of hope. Evans is an ‘honest’ player, in that ridiculous parlance of English football, and there’s no brook with the player’s effort or attitude. Yet, there has always been the nagging feeling that he was never quite good enough to represent United. After a season in which injury, poor form and an unfortunate suspension have hit the player hard a move might well revitalise his career. Chance of departure: 7/10. Fee if sold: £8-10 million.

Oh Robin, it was so good. Remember that volley against Aston Villa? How we laughed and cried together. Then something turned sour. You didn’t like Moyes. None of us did. Neither did your hamstring. Or ankle. Or hip. We’ll always have 2013. Van Persie’s £24 million fee may not turn out to be great value – United will recoup only a fraction of the fee should Van Gaal push out his countryman this summer. Yet, it feels like the right time to let him go. The striker has spent too few minutes on the pitch this season and too many in the treatment room. When Van Persie has played a touch of pace and movement has ebbed away; the cruel passage of time. In truth United needs to reinvigorate the attack next season and the Dutchman’s sale makes much sense. Rumours of a move to Italy this summer might extend the player’s career too. Chance of departure: 7/10. Fee if sold: £10-12 million.

Remember the excitement? Nearly £60 million spent on a truly world-class star; Europe’s leading assist-maker in 2013/14 and the Man of the Match in Real Madrid’s La Decima Champions League final victory. The season started well for Di Maria too – there were stunning performances to go with that magical goal against Leicester City. It lasted not long enough. The Argentinian’s form wavered and a house break-in seemingly robbed the player of his spirit as well as his possessions. The challenge isn’t physical so much as mental – a level of adaptation to Van Gaal’s ‘philosophy’ as well as English football and culture is required. Noises coming out of Old Trafford in recent weeks point to a second season at United and a renewed sense of effort to extract performances from a player of truly wonderful talent. Chance of departure: 4/10. Fee if sold: £45-50. million.

… and the notable kids

Nick Powell
Powell has struggled to adapt to United’s standards despite enjoying a fine loan spell at Wigan Athletic in 2013/14. Deployed as a forward at Crewe Alexandra, Powell’s natural position might be in an attacking midfield role, although the youngster’s use of the ball is not always up to scratch. He is likely to be offered a chance to rebuild elsewhere this summer. Chance of departure: 7/10. Fee if sold: £1-2 million.

Adnan Januzaj
There is so much talent in the Belgian’s dancing feet that United has lost a significant attacking force this season in Januzaj’s absence. In part, Van Gaal simply doesn’t trust the youngster yet; in part the player has failed to adapt. Mostly the Januzaj simply didn’t fit in his manager’s system. In the 4-3-3 formation Van Gaal is planning for next season Januzaj might flourish, but with confidence shot a move away on loan may be a sensible path forward for all. Chance of departure: 7/10. Fee if sold: loan.

Tyler Blackett
Blackett enjoyed an unexpected rise to the first team before Christmas, although has rarely featured in the subsequent months. United’s probable purchase of an international-standard experienced central defender in the summer is likely to cut Blackett’s chances further. Another for whom a loan may well be a beneficial move. Chance of departure: 6/10. Fee if sold: loan.

Patrick McNair
The Irishman’s composure in central defence and determination at full-back may well mean that Van Gaal is reluctant to let McNair leave on loan during the summer, although his chances may be infrequent unless injury continues to strike United’s senior defenders. Chance of departure: 4/10. Fee if sold: loan.

James Wilson
The striker has featured in 16 games – 12 as sub – scoring two goals for Van Gaal’s side this season. It has not quite been the breakthrough campaign many expected for the lightening quick forward. Wilson’s United future depends on whether either of Van Persie of Falcao remains at the club, and where the club chooses to spend on a new forward this summer. A loan away is possible even if Van Gaal was reluctant to sanction it this season. Chance of departure: 4/10. Fee if sold: loan.