Manchester United owner, the Glazer family, is exploring options to float the club in the United States, reports Reuters this week, after abandoning a mooted Asian IPO for the second time. Seeking up to £600 million in a partial floatation, the Glazers have now binned attempts to list the club in both Hong Kong and Singapore, with a New York IPO now proposed by the Tampa-based family. But just as Asian plans foundered on the Glazers’ ambitious over-valuation of the club, so presumably will any US float.

Plans to float in the States is one of a long line of proposed solutions to United’s £423 million debt, which has dogged the club since the Glazer family’s 2005 leveraged buyout. Two subsequent refinancing rounds have converted debt secured to buy the club into a long-term bond, while the family also paid down hundreds of millions in now infamous payment-in-kind hedge fund loans, presumably through a further US-based loan. The last published accounts showed gross debt at around £423 million, with net debt at £397 million.

The latest plan, claims Reuters, is to position United as a global “media business,” rather than appealing to the retail-centric institutional investors in Singapore, who failed to express the kind of interest the Glazers had sought. The Americans are also said to be pressing ahead with a dual-track listing in New York, offering only a small percentage of shares to the market with full voting rights, enabling the family to retain full control over the club.

“The U.S. listing would come either on the New York Stock Exchange or its electronic rival Nasdaq,” the Reuters article claimed, citing unnamed sources.

“A person familiar with the New York Stock Exchange, owned by NYSE Euronext, said an exchange decision is expected soon. U.S. One of the sources said Manchester United had always planned to position itself as a global media business rather than a sports franchise, suggesting that a U.S. listing would make more sense. Investors are familiar with the dual-class share structure that was under discussion for Manchester United’s Singapore listing, having seen it used by household names such as Google and Facebook.”

However, the family pulled the plug on Asia in part due to ‘volatile market conditions’, say analysts familiar with the situation – a less-than-subtle euphemism for the failure to attract interest at the price sought: a valuation in excess of $4 billion (£2.4 billion). Meanwhile, in a down-turned economy other sports and retail listings have failed in Asia, including the now postponed Formula One float, and the underwhelming Prada and Samsonite IPOs.

The mooted float in the US may suffer the same lack of investor intention though, unless the family lowers its proposed asking price, or promises the market a huge premium on future dividends – a logistic and legally impossibility.

Indeed, simple back-of-an-envelope calculations illustrate the Glazers’ dilemma in listing on any market, let alone in the US where there is no history of sports franchise flotation.

On takeover in 2005 the Glazer family paid 300p per share for 70 per cent, or thereabouts, of the club it did not already own, valuing United at £795.76 million on a price-to-earnings (P/E) ratio of around 19. Seven years on, and although the volume of shares to be listed is unknown – ceteris parabis – United might be reasonably be valued at more than £2.215 billion on the same multiplier. This is a reflection of the steep rise in earnings before tax and deductions under the Glazers’ stewardship.

The line drawn by the Glazer family between the price paid in 2005 and a 2012 paper valuation in excess of £2.5 billion is conveniently transparent. But all things are, of course, not equal and revisiting the takeover is illustrative, predominantly, of the steep premium paid by the Glazer family in 2005. It was a deal front-loaded with significant ‘goodwill’ – that is, the value place on intangible assets such as United’s ‘brand’.

In the intervening years the global financial outlook has deteriorated markedly, while sharply rising staff costs and uncertainly surrounding UEFA’s Financial Fair Play (FFP) regulations adds more than a little fog to any valuation even on the most generous projections of United’s future income.

US-based magazine Forbes uses a more pragmatic P/E multiplier of 12 in it’s 2012 list of “Soccer Team Valuations,” placing an approximate value on United of £1.39 billion. Even this may be generous. Forbes applies a multiplier of 8.7 to the structurally-unacquirable – and more profitable – Real Madrid, 13.6 on Barcelona, 13.1 on Arsenal and 10 on Chelsea. Perhaps a better guide still is the 10.3 multiplier at which an ailing Liverpool was sold to Fenway Sports Group in 2011.

Calculation of an IPO pricing is, as ever, part art as well as science. Elsewhere in New York the world’s most valuable company Apple is trading at P/E 14, and Google at 17.

There is almost no comparable sports franchise listed in New York, which ought to say something. However, stretching the ‘sports’ term to World Wrestling Entertainment, Inc. (WWE) yields an interesting comparison. In the same period as United’s last reported accounts WWE, on very similar earnings, yielded a market cap of around $1.39 billion (£894 million). The market considered the price a bubble, and WWE is today trading at less than half its previous share price.

Little wonder sceptics doubt the Glazers’ ability to list on NYSE at the price seemingly desired. The market is likely to reject the listing by under-subscribing the IPO, or much like the recent Facebook listing, the share price will tumble on open trading.

However, it is unlikely the Glazer family will get that far according to some observers. Independent United blogger and analyst Andy Green called the proposals “desperation” on the Glazers’ part in an interview with Reuters, Thursday.

“First it was Hong Kong, then Singapore and now New York,” said Green.

“The Glazers assumed they would get a high price in Asia and they haven’t – I’m not sure they will in the US either given there’s no tradition of listed sports clubs.”

That said the Glazer family will certainly cheer the Premier League’s new television rights deal struck with BSkyB and BT this week that will yield more than £3 billion between 2013 and 2016. It is a 70 per cent uplift in domestic media income, which alongside international rights still to be negotiated, could net United £20 to £30 million more annually in Premier League media rights.

Sky paid £2.28 billion for the rights to five of the seven available packages, which secured 116 live matches a season. BT acquired two packages for a total of £738 million, with the telco able to broadcast 38 matches per season.

“This will take our clubs up a notch closer to those clubs who benefit from the individual selling model, say in Spain,” Scudamore said.

“I hope this will keep our league as competitive as it can be, under a collective selling model, with the other leagues. We have just come off the back of a fantastic season and, yes, it has been good for us that we are in the market and selling something at the time when what we are displaying on the field, and therefore able to broadcast, is an attractive proposition.”

Attractive though the proposition may be, more than 20 years of Premier League history has taught that the symbiotic relationship between television income and players’ wages is almost perfectly correlatory. The television income bubble has not burst, but neither has players’ desire for ever more lucrative contracts been satiated. 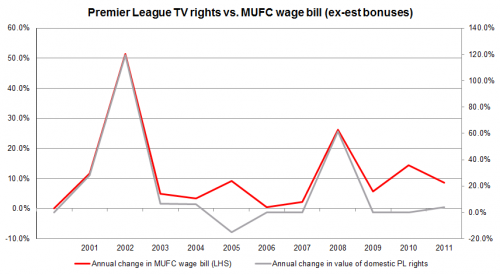 Perhaps, then, the real question with the IPO is not whether the Glazer family can get this one away, at the price they want, and with associated bond buy-back so heavily promised last time around, but what the strategy is post failure. It’s a scenario that, unlike the Premier League rights process, will bring little cheer to the American family.

Nor to United supporters concerned that the club should become competitive in the transfer market once again. After seven years of parsimony, it need not take a cynic to spot that dose of realism.