Sir Alex Ferguson will surely greet Javier Hernández’ Gold Cup win with mixed feelings. Delight for a player who has burst onto the international scene as a genuine star; concern that the 22-year-old striker faces burn out after seven summer matches that crisscrossed North America and racked up more than 8,000 miles on the continent alone.

There will be relief then that Chicharito is set to miss Mexico’s invitational appearance at this summer’s Copa America, with El Tricolor set to field an experimental squad in Argentina. While Mexico’s status as an invited participant means head coach José Manuel de la Torre has no right under FIFA statutes to call up players not released by their clubs, Ferguson would hardly relish creating friction at this stage of Hernández’ Manchester United career.

On a personal level the summer could hardly have gone better for the United striker, who scored seven goals in as many games to fire Mexico to the gold medal. Hernández may not have scored in the final – a 4-2 win over the ‘home’ side USA in Pasadena on Saturday night – but the striker picked up the tournament’s Golden Boot award and its “Most Valuable Player” gong in any case.

Hernández’ summer feat takes his international total to 21 goals in 29 appearances, adding to the 20 goals the 22-year-old scored in all competitions last season. Far cry from thoughts of quitting the game as the Little Pea struggled to make the break through at Chivas Guadalajara two years ago. Such is the player’s rise to fame in the past year that Hernández could make almost any team in the world.

“I wasn’t playing the minutes that I wanted to at the time and the coach wasn’t playing me. I don’t know why that was, but I was frustrated,” Hernández said after joining United in April 2010.

“My confidence started to go down and I asked my father and my family whether I was still right to play football. The past is the past. I had a very different mind then.”

Confidence now flows through a player who has become Ferguson’s first choice striker at Old Trafford, displacing Premier League top goalscorer Dimitar Berbatov in the Scot’s side during the business-end of last season.

Yet, truth be told, the 22-year-old didn’t have the finest of games on Saturday night, suffering from an unusual profligacy in front of goal as Mexico came back from 2-0 down inside half an hour to defeat their hosts 4-2 in normal time. Perhaps the pressure finally told. Played in Southern California the match was a home fixture in name alone with the majority of a partizan 94,000 crowd cheering for the men in green.

But Hernandez’ two assists in the final add to the feast of goals during the tournament, scored in a delightfully diverse fashion. The striker scored a hat-trick in Mexico’s 5–0 win against El Salvador – header, right-foot, cheeky penalty – a brace against Cuba and then the winner in a 2–1 win over Guatemala; a stunning back-heel at the near post. Showcasing’s the striker’s ability to score by whatever means, Hernández scored Mexico’s winning goal in the 99th minute – with his crotch – to beat Honduras 2-1 after extra time in the semi-final.

Hernández will now be given an extended summer break by Ferguson, with the striker unlikely to feature heavily, if at all, in United’s summer tour to the United States. Fear of burn out is real, despite the limited schedule faced at United last season. In truth Hernández is likely to play more than 40 times for the Reds in the coming season, with Berbatov relegated to third choice if the 30-year-old Bulgarian remains at the club beyond the transfer window.

The rest may mean disappointment for the growing army of United supporters in the states, where Ferguson’s side visits Boston, Seattle, Chicago, New York and then Washington during a two-week tour from 13 July. After all, pre-season training begins in just over a fortnight.

Yet, typical of the man, Hernández is focussed on banishing any thoughts of ‘second season syndrome’ rather than soaking up his new-found global fame.

“Success is written into the DNA of this club,” said the 22-year-old last week.

“I’m at the best club in the world. Everything is done to succeed and win titles. There is only the Champions League defeat that sticks in the throat. I am extremely happy with my season, but I do not rest on my laurels. I want to do even better next season. I want to help this club make history.”

United fans will sleep easy on that thought. Ferguson, meanwhile, has a delicate decision to make on Hernández’ eventual return to the United fold. 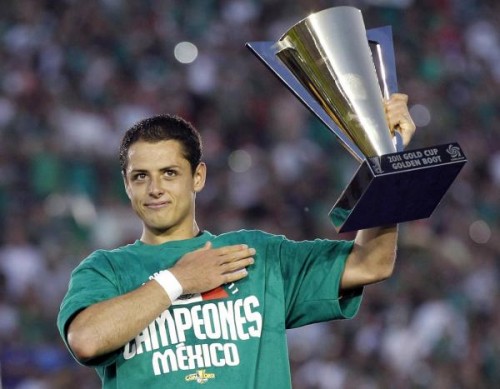