Today we bring you the remarkable tale of Luis Nani, a heart warming story of human triumph over adversity, and a great example to the many losers out there that there is always hope, even for the most hopeless of cases.

In his first interview (today), the usually shy Nani opens himself up like never before, to talk frankly about the heartbreak of losing Cristiano, his addiction to somersaults and his deep dislike of Michael Jackson’s music.

We all remember the time, only a few weeks ago, when the football you were playing was nothing short of bad. And I mean really, really bad. Our poor opinion of you became as easy as ABC, and as clearcut as black or white. We wanted you out of our life. There were times when I wanted to grab you by the scruff of the neck and shake your body down to the ground.

Luckily, your great performances of late have calmed me down enough to ask you what everyone wants to know, how the bleedin’ hell did you manage to prove us all wrong and produce such an unexpected turnaround? 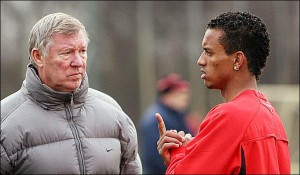 Thank you for talking to me. I am very happy now after a long period of sadness where I wanted the whole world to just leave me alone.

I felt very sad that my best friend Cristiano left. Everyone loves Cristiano, and it was hard to accept the fact he was gone. ‘You are not alone’ I kept telling myself, but on that Old Trafford pitch, if felt like it.

The change came when Sir Alex put his arm around me and told me that my depression was part of human nature, but it could be dangerous if I didn’t beat it soon.

So I took a long hard look at the man in the mirror and realised that I wanted to be starting something, something positive at United.

I am a footballer, so my ambition was never to heal the world, but simply to show the fans another part of me.

Fans saw me as nothing more than a speed demon, a circus performer and worst of all a Michael Jackson impersonator. I had enough and I wanted to make that change. 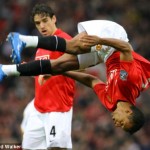 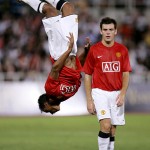 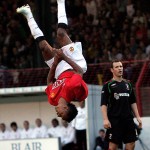 So I stopped practicing somersaults and concentrated on football instead. No more double pirouettes for me, just hours of pass and move drills. This is it.

Since then, things have been fantastic, and now, the fans love me the way they loved Ronaldo. In fact I am playing so well that Real Madrid will come for me soon, I am sure of it.

In the meantime my goal is to get the fans to sing my name like they still do for Carlos Tevez, something like ‘Luis Nani is a red, he hates Jackson!” would be very nice.

I have many ambitions now with my new self belief and popularity amongst the fans. The most important thing however is to finally make sure people stop seeing Nani as a Michael Jackson look-alike and more as a person in my own right. That is my true hope and my most important life goal. Thank you all for your support.

A worthy dream. And I am sure we all agree, it couldn’t happen to a nicer man (in the mirror).