News this week that Manchester United director Joel Glazer – or Bryan depending on the report – may have met Netherlands national manager Louis van Gaal comes as little surprise. While the club denies a meeting has taken place it is surely inconceivable that United’s executive management is not forming a contingency plan. After all, under David Moyes, United has lost 14 times across four competitions, crashing out of the Champions League to Bayern Munich last week to end hopes of a trophy under the former Everton manager this season. In truth, most elite clubs would have handed Moyes his P45 by now.

Indeed, so chaotic has the campaign become that the Scot is said to face a much divided dressing room, with two distinct pro and anti-Moyes camps having formed over the past nine months. It is amid this atmosphere of failure, in which United’s dressing room is no longer singing from a single hymnsheet, let alone one drafted by the 50-year-old manager, that the club’s owners are potentially considering change. There may well be a desire for ‘long-term stability’, but it is thought that some in United’s hierarchy recognise that stability is a factor of success; longevity the by-product of achievement.

Moreover, with United’s transfer budget potentially upwards of £100 million this summer, there is a growing feeling that Moyes is far from the right man to begin United’s rebuilding process. And in this spirit Rant reviews the potential candidates should Moyes get the boot this summer…

Make no mistake van Gaal is an outstanding candidate to replace Moyes should the Scot go this summer. Winner of seven domestic league titles, three domestic cups and two European titles, the Dutchman boasts the profile of an elite club manager in every sense. This is in stark contrast to Moyes those of a crueler persuasion might add.

van Gaal found fame as the 43-year-old manager of a young Ajax side that won the Champions League in 1995. In two spells with Barcelona, two with the Dutch national team, and a period in charge of Bayern Munich, van Gaal has built a reputation as a tactical innovator and a strict disciplinarian. Gravitas and respect is guaranteed.

Despite those high profile appointments it is perhaps his spell at AZ Alkmaar that bore witness to van Gaal’s most impressive triumph: the Dutch league title in 2009. With average crowds of less than 15,000, van Gaal led the provincial team to only its second title in the club’s 50-year history.

In the context of United’s recent fall from grace, van Gaal is committed both to development of the younger generation and to attacking football in the finest traditions of Total Football. At 62 the Dutchman is no long-term appointment, but then a safe pair of hands for three seasons might do United well.

van Gaal brings weight to a sometimes combative management style that precipitated conflict at Bayern. It is the van Gaal way or the highway; Sir Alex Ferguson would surely approve. That said, the impressive track record reads just two titles in the past 15 years, and dismissals at Bayern and Barça.

Tactics: van Gaal typically sets up in an attacking 4-3-3 formation, with two wide players and three central midfielders in the Dutch style. At United, using the current squad, van Gaal might deploy Robin van Persie as his number nine, use Shinji Kagawa and Adnan Januzaj as inverted wingers, with Juan Mata, Michael Carrick and Tom Cleverley supporting from midfield. 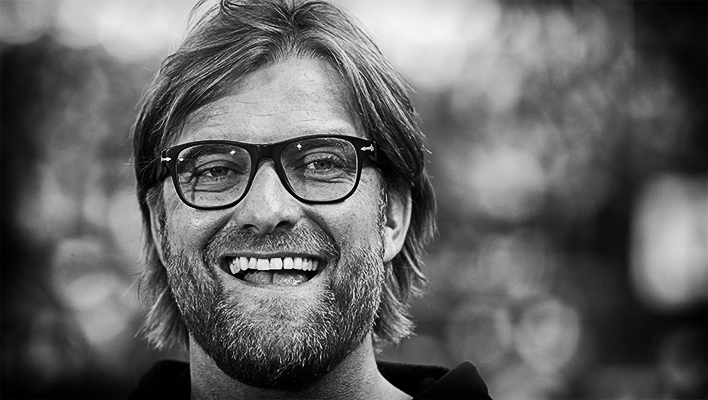 Klopp has won many plaudits over the past four campaigns after building a distinctive, attacking, Dortmund side that secured two Bundesliga titles in succession and then finished runners-up to Bayern Munich in the 2013 Champions League final. It is a period that represents the zenith of Klopp’s managerial career, yet one that may have already come to an end as Bayern use the club’s financial power off the pitch to dominate on it.

Six years after appointment at Dortmund many pundits believe that the German is ready for a move to one of Europe’s major clubs, although Klopp has reportedly turned down offers from Manchester City, Chelsea and Real Madrid. It is an impressive demonstration of loyalty.

Klopp has shown little indication that he is willing to leave Dortmund this summer either, although there is a precedent: the 46-year-old moved on from Mainz in 2008 when he felt he could no longer take the club forward. He had been associated with Mainz as player and coach for nearly 20 years.

The German might represent a highly popular appointment at Old Trafford; one with a clear vision of both playing style and youth development. His Dortmund side has regularly featured locally developed players. However, there are obvious risks: Klopp has little experience recruiting at the top end of the transfer market, while he has never worked or played outside Germany. The first may endear Klopp to the Glazer family; the latter is unlikely to do the same.

Tactics: Klopp deploys a familiar 4-2-3-1 system, with an attacking hard-pressing style. His number nine is supported by a playmaker and two wingers. With United’s current squad, Klopp might use Rooney as a dynamic forward, with Nani and Januzaj in wide roles. Mata or Kagawa might float, with Carrick and Marouane Fellaini holding.

Alongside Klopp, Simeone is the hottest managerial property in European football. Working with a budget a fraction of that enjoyed by larger rivals both domestically and on the continent, Simeone has created a dynamic Atlético side that threatens to take both La Liga and the Champions League this season. This is no flash in the pan: Atlético secured last season’s Copa del Rey and the 2012 Europa League. It is believed that Simeone is already on a long-list of potential candidates drawn up by United’s board.

Simeone enjoyed a storied playing career, winning trophies in South America, Europe and at international level with Argentina. And the tough-tackling midfielder has built an Atlético  side very much in his own image, seamlessly blending touch with brawn; muscle and some of the most talented players in Europe.

Following retirement Simeone worked in Argentina with Racing Club and then won Argentinian titles with Estudiantes and River Plate, before suffering a difficult spell in a fledgling coaching career. Simeone spent a brief period with San Lorenzo, Catania in Italy and then Racing for a second time. He was appointed head coach by Atlético in December 2011.

Simeone led Atlético to the Europa League final against Athletic Club in 2012, and to a famous Copa del Rey final triumph over Real Madrid last year. It was arguably the greatest triumph of his managerial career.

Tactics: Simeone employs a narrow 4-4-2 built around hard work and intense pressing. The Argentinian typically employs two forwards, supported by a four-man midfield diamond. At United, Simeone might select both Rooney and van Persie, supported by Mata, Fellaini, Cleverley and Carrick in the holding role.

There has never really been any doubt that Giggs would move into management once his playing days came to an end – it’s just that the Welshman has continued working on the field well into his 41st year. Many see Giggs as a future United manager in waiting, but could the former winger move directly from playing into the hot-seat? It’s possible, if a very long shot. Certainly, it seems as if Giggs will finally retire in the summer, whether by choice or Moyes’ instruction.

Giggs might be a universally popular choice as United manager, but his appointment is likely to be far too risky for the Glazer family. Moreover, while two decades under Sir Alex’ instruction might have rubbed off the same was once thought of Bryan Robson, Paul Ince, Roy Keane, Mark Hughes and Steve Bruce – a quintet with very mixed results.

Juve’s two-time Serie A winning coach, with a third on the way, has built an impressive CV in a managerial career not yet into its eighth year. Conte has long been a son of The Old Lady, having played more than 400 Serie A games for the club, but spent plenty of time in managerial backwaters before receiving the call in 2011. After retiring in 2004, Conte coached at Arezzo – twice – Bari, where he secured the Serie B title, Atalanta and Siena – five jobs in as many years. It was a tough proving ground for the 44-year-old former midfielder.

In the past three years Conte has solidified Juve’s revival following the Calciopoli scandal, building a team around Paul Pogba, Arturo Vidal and the irrepressible Andrea Pirlo. Often deploying a 3-5-2 now popular in Italy, Conte has built an attacking home team, if one that can be circumspect on the road.

The Italian would represent a significant gamble even if he is willing to move on from Juve, which is by no means certain.

It should surprise few, but Ancelotti may not have done enough to earn a second season at Real Madrid, leaving the Italian open to offers next season. Still, Ancelotti has few peers in the game, having twice won the Champions League, secured the Club World Cup, and won league titles in three countries. With Chelsea the 54-year-old secured the Premier League and FA Cup double in 2010. Still, Real have not yet claimed La Liga and Ancelotti’s side was perhaps fortunate to scrape through to this season’s Champions League semi-final.

Whatever happens this summer, Ancelotti has enjoyed a storied career, making his name at Milan where he coached for eight largely successful seasons. He twice finished second in Serie A with Juventus before winning the 2004 title with the Rossoneri. The Champions League was secured twice with Milan, before Ancelotti claimed titles in England and France. He may yet win silverware with Real and would represent a very safe pair of hands.

de Boer is a young coach with a strong future who is likely to be in demand across the continent this summer. The former Dutch international has led Ajax’ renaissance with four Eredivisie titles in a row, including that of the current campaign. Reportedly turned down an offer from Liverpool in summer 2012 before Brendan Rodgers’ appointment at Anfield, while Tottenham Hotspur’s approach is yet to be formalised.

Young manager who has built an impressive Southampton side that will comfortably secure a mid-table position this season. Would be attracted by an offer to coach at a higher level, although this summer is likely to be a job too soon for any of Europe’s largest clubs.

Pep Guardiola, 46 – Bayern Munich
The man many fans believe Sir Alex should have anointed as the next United manager. Guardiola has enjoyed a fruitful first season with Bayern, securing the Bundesliga title with seven games to go, while his side is into the Champions League semi-final. Enjoyed a hugely successful four year spell at Barcelona.

Jose Mourinho, 50 – Chelsea
Arrogant, pretentious, controversial and brilliant in equal measure. One of the world’s finest coaches and a serial winner in Portugal, England, Italy and Spain. Possibly the best strategist and in-game tactician of the modern era. Mourinho was overlooked for the United job due to a perceived lacked of loyalty and his controversial manner.

Fabio Capello, 67 – Russia
Veteran Italian coach has built a club career with very few peers, although the four year spell in charge of England has tarnished the former Milan manager’s reputation on these shores. Still, he has secured five Serie A titles and two in Spain. Vastly experienced and a very safe pair of hands if only for a short spell.