David Moyes’ Manchester United squad left the city on Wednesday bound for Bangkok, with fixtures to follow in Sydney, Yokohama, Osaka, Hong Kong and Stockholm before the new season begins. The planet’s great footballing temples. And as ever, with commercial imperatives forefront of mind, Moyes’ squad will travel more than 25,000 miles before the Community Shield kicks off against Wigan Athletic on 11 August.

Indeed, this is not a tour where United will be stretched on the field, with the Reds facing an oddball collection of ‘All Star’ exhibition outfits and local teams in Asia and beyond before returning to Europe. Moyes’ side will not meet top quality opposition until Sevilla visits Old Trafford for Rio Ferdinand’s testimonial just 48 hours before United heads to London for the Shield. Same old pre-season then.

United may not enjoy the kind of world-class facilities on offer during last year’s equally commercially minded tour of the United States, although with huge support across Asia it won’t take Moyes and his newly recruited backroom staff long to discover the size of the task at hand. United’s popularity is still unparalleled on the global stage.

But whatever the quality of opposition on offer, or the facilities at hand, the tour will at least provide an invaluable opportunity for those on the fringes of United’s squad to impress; the youngsters who may, or may not, have a key role to play in the season ahead.

It is also a pivotal few days for some of United’s more established stars – to play their way into the team or potentially out of the club. Eyes will be firmly fixed on Anderson, Nani and Wilfried Zaha in particular.

Moreover, after 56 days since United ended the 2012/13 season, supporters are looking forward to the Reds reappearing. Here’s Rant’s guide the United’s opposition, venues and the players to watch on tour.

Singha All Star XI – the All Star XI is a representative side of the Thai Premier League managed by Dr. Vichit Yamboonruang who, bizarrely, is director of the League. Yamboonruang will be assisted by former Thailand international Piyapong Pue-on. Players on show could include Spaniard Carmelo González, Filipino Javier Patiño and local star Teeratep Winothai. Or not. Frankly Rant doesn’t know either. Still, it should be a gentle warm-up for Moyes’ side.

Australian A-League All Stars – the A-League is yet to capture the nation’s hearts, but with Union, Aussie Rules, Cricket and especially League all on offer that is perhaps little surprise. Yet, the national team has qualified for World Cup 2014 and there are a smattering of decent players likely to feature against United in Sydney. Italian legend Alessandro del Piero, Emile Heskey and former Red Liam Miller could all start. It should be an interesting challenge.

Yokohama F·Marinos – Marinos remain one of the most successful top-tier Japanese clubs, having won the J-League three times and finished second twice in the 20 year professional era. Formed by the merger of Yokohama Marinos and Yokohama Flügels in 1999, the club is owned by the Nissan Motor Company. In common with many J-League teams the team is staffed by local players with a smattering of Brazilians. Captain Shunsuke Nakamura boasts 98 caps for the national team, while veteran Yuji Nakazawa appeared more than 100 times for Japan before retirement three years ago.

Cerezo Osaka – Osaka has floated between J1 and J2 over the past decade, although finished a modest if safe 14th last season. The club, which is named after the ‘Cerezo’ cherry blossom flowers so famous in the Japanese spring, was once home to United’s Shinji Kagawa – he played more than 120 times for the side between 2006 and 2010. In common with many Japanese teams Cerezo is owned by a corporation – Yanmar, a diesel engine manufacturer.

Kitchee FC – five times winners of the island’s first division Hong Kong Barça – no really – will receive some HK$8 millon (£700,000) to host the match at which a sell-out 40,000 crowd is expected. Good job since United is reportedly being paid double to play in south China. The side features a mix of locals, Chinese and ex-pat players including Zeshan Rehman, the first British Asian to start a Premier League match. Managed by former Barcelona youth team coach Àlex Gómez.

AIK Fotboll – fourth in Allsvenskan last season, AIK is slowly on the rise after suffering three difficult seasons in recent times. AIK claimed the title in 2009, but has since seen three managers leave with the heights of that triumph yet to be repeated. Still, 11-times national Champions, AIK remains one of Sweden’s biggest clubs having recently moved into the outstanding Friend’s arena. Currently managed by 40-year-old Swede Andreas Alm.

Rajamangala National Stadium, Bangkok, 65,000 – the national stadium of Thailand opened in 1998 and was first used during the ’98 Asian Games. Predominantly used for international matches and a few major club games, Rajamangala is a large concrete bowl, not unlike a brutalist version of John Smith’s Stadium in Huddersfield. Located in Hua Mak, north-west Bangkok, United supporters will enjoy an epic trek through the city’s notorious traffic jams with no public transport serving the stadium.

ANZ Stadium, Sydney, 82,500 – Stadium Australia was built to host the 2000 Summer Olympics at a cost of some A$700 million and then reconfigured post Games. Originally holding more than 100,000 spectators, the venue now hosts a variety of sports including the New South Wales rugby league team and the National Rugby League grand final. The stadium also hosted the 2003 Rugby World Cup finals. It is located in Sydney’s Olympic Park some 20 miles east of Bondi Beach. 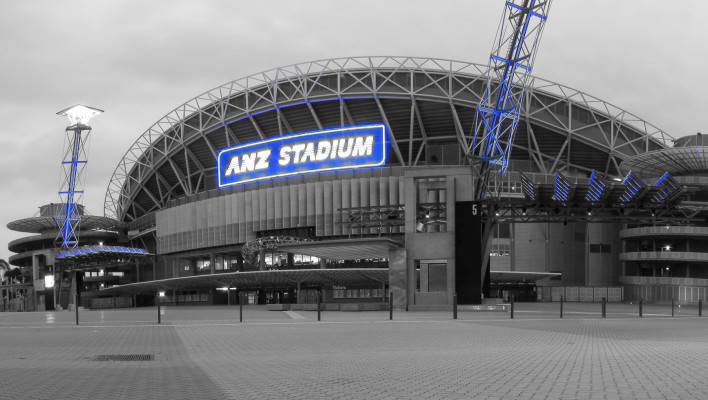 Nissan Stadium, Yokohama, 72,327 – the International Stadium Yokohama is a multi-sport venue built ahead of the 2002 World Cup held in Japan and South Korea. It hosted three first-round games during the tournament together with the final between Germany and Brazil. International Stadium was also host to the FIFA Club World Cup six times over the past decade, including United’s victory over LDU Quito in 2008. It is located near Tsurumi River in Midori-ku, a commuter town for central Yokohama and Tokyo.

Osaka Nagai Stadium, Osaka, 50,000 – home to England’s notoriously laboured scoreless draw against Nigeria in the 2002 World Cup, Nagai Stadium was originally opened in 1964 for the Summer Olympics. The stadium was expanded both for the National Sports Festival of Japan in 1997 and the 2002 World Cup and is regularly used for athletics. The annual Osaka Grand Prix and the Osaka International Ladies Marathon both use the venue. Rumours that Anderson is to take part in the latter are yet to be confirmed.

Hong Kong Stadium, Hong Kong, 40,000 – So Kon Po Stadium was built in the 1950s and later renovated in 1994, boasting one of the most picturesque locations on tour. With the mountains rising out of the north, and skyscrapers dominating the south, United fans might enjoy the view more than the limited opposition on show. So Kon Po also hosts Rugby Sevens annually and the IRB Rugby World Cup Sevens in 1997 and 2005.

Friends Arena, Stockholm, 50,000 – home to both the national team and AIK, Friends is a new-build area located near Lake Råstasjön in Solna. Boasting a retractable roof, the facade (above) can apparently be illuminated in up to 17 million colours. None of which will be red come 6 August. The stadium hosted Sweden’s 4–2 victory over England last November and will be home to the UEFA Women’s Euro 2013 Final later this summer.

As ever on tour United takes only a partial squad with injuries and international commitments disrupting preparations for the new season. Captain Nemanja Vidic missed the squad’s flight to Bangkok on Wednesday afternoon, with the Serbian suffering another bout of sciatica. Wayne Rooney returned home on Thursday after suffering a hamstring injury, while Chris Smalling, Ashley Young and Nani are also absent with foot, ankle and nasal injuries respectively.

However, there is some good news in a threadbare squad with Robin van Persie and David de Gea likely to feature from Sydney onwards – each misses Saturday’s fixture in Bangkok due to international commitments. Shinji Kagawa will join the party in Japan, while Fabio da Silva makes the tour after returning from a season on-loan at Queens Park Rangers.

And while many may have hoped for a new acquisition or two, many eyes will be on youngsters Michael Keane, Wilfried Zaha, Jesse Lingard,and Adnan Januzaj who join the tour party. Indeed, Zaha could be thrust strait into Moyes’ first team with Nani and Young out, the twinkle-toed winger seeking to establish himself at Old Trafford following a £15 million move from Crystal Palace.

One thought on “Pre-season starts here”