More than a dozen Manchester United players are likely to feature in the 2014 FIFA World Cup in Brazil, with the big kick off now just 204 days away. Qualification concluded on Wednesday when Mexico and Uruguay became the final pair of teams to reach the World Cup, which runs from Thursday, 12 June to Sunday, 13 July 2014. Across six confederations, 203 teams produced 828 qualifying matches and 2297 goals. In all 32 qualifiers will take part across 12 Brazilian venues from Manaus in the north to Porto Alegre some 2,000 miles south.

The draw for the tournament will be held in Rio de Janeiro on 6 December, with more than a few nervous coaches hoping to avoid the inevitable ‘group of death’ at the first stage, including England manager Roy Hodgson.

In this three part guide to the World Cup, Rant looks at the teams, the stadia and most importantly the Manchester United players and connections we are likely to see in Brazil. Some are more tenuous than others!

Veteran Scolari is into his 23rd coaching position in a career that has twice come round to the Seleção. Scolari may have failed at Chelsea, but 20 major trophies, including the 2002 World Cup, underpin his status in the world game.

Brazil host World Cup 2014 with more than 200 million Brazilians expecting comprehensive victory in Estádio do Maracanã on 13 July. Absolutely, positively, nothing less will do. Fortunately, Scolari has fashioned, if not a classic Brazilian side in the 1970 mold, then a highly talented one. Victory over Spain in last summer’s Confederation Cup final confirms Brazil will be formidable opponents on home soil where Barcelona’s Neymar is the star turn.

United connection: United’s trio of Brazilians Anderson, Rafael da Silva and Fabio da Silva, are highly unlikely to make Seleção. Anderson has not featured from the national team since 2008, while Fábio has not played since international since his debut on 22 September 2011. Rafael, who has two full caps, featured in last year’s Olympics as an under-23 player, but was roundly accused of underperforming in the Wembley final. He hasn’t featured for the full side since.

Sabella, 59, is a former Leeds United and international midfielder, who formed a long-term coaching partnership with Daniel Passarella, before becoming Argentina coach in 2011.

Sabella’s team has a chance, as any side that includes Lionel Messi does, but Argentina has flattered to deceive so often since reaching the final in 1990. Messi certainly isn’t a failure at international level, although 37 goals in 83 internationals is nowhere near his club record, but it is with the diminutive Barcelona forward that a nation’s hopes rest. Sergio Agüero, Érik Lamela, Gonzalo Higuaín, Ezequiel Lavezzi and Ángel di María will surely provide the firepower to take Argentina to the knockout stages.

United connection: there are no United players in the Argentina squad, although the Reds were close to a deal with Benfica for the defender Ezequiel Garay last summer. David Moyes’ appointment appears to have nixed a move for the former Real Madrid centre-back.

Argentine Pékerman was once considered a specialist youth coach in developing a highly successful Argentina under-20 side in the 1990s. Two years in charge of the national team ended after World Cup 2006 when Argentina crashed out to Germany in the quarter-finals.

Los Cafeteros produced an outstanding qualification campaign, losing at home only to Argentina. But, then, we have been here before, with a high-quality Colombia outfit often failing on the big stage. There may be few world stars in this Colombia side, but that should not deflect from the genuine threat Pékerman’s side will pose on South American soil. The draw will be crucial, but fifth-ranked Colombia will be disappointed if a quarter-final spot is not booked. Radamel Falcao, James Rodríguez and Jackson Martínez will lead an attacking line-up.

United connection: no Colombians have ever played for United, although there was plenty of speculation about a move for Rodríguez last summer – a rumour swiftly ended by Monaco’s deep pockets. Meanwhile, youthful Porto winger Juan Fernando Quintero has been scouted. 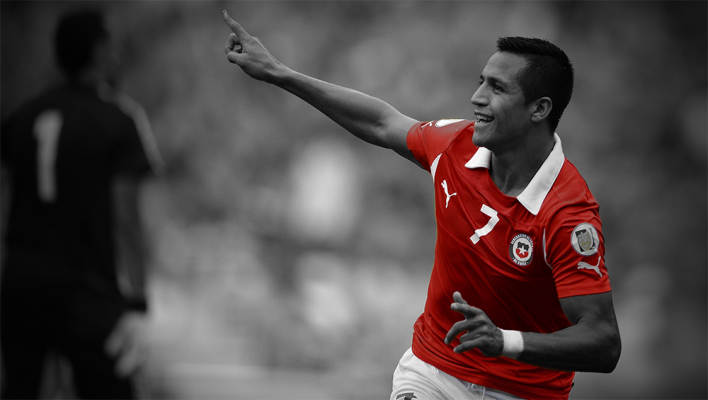 Sampaoli has built a strong reputation over a decade of coaching across South America. The Argentine enjoy no playing career of note, but secured three major trophies with Universidad de Chile before taking over the national team in December 2012.

If there was any doubt about Chile’s quality the debate should have been ended by the comprehensive nature of victory over England at Wembley. Chile’s football is often slick, with neat passing exchanges and a love of possession to match any. And in Sampaoli the nation has a coach prepared to be tactically flexible. The smooth transition between a back three and a back five is likely to flumox more than one side at the World Cup.

In midfield Juventus’ Arturo Vidal and Fiorentina’s  Matías Fernández provide silk and steel, while Barcelona forward Alexis Sánchez will surely break the national scoring record over the next two years. Sánchez, who is currently enjoying his finest season at Barcelona, has 22 goals in 62 caps for the national side.

United connection: Sir Alex Ferguson twice attempted, and failed, to secure Sánchez’ signature for the Reds. The former Udinese forward signed for Barça in July 2011 much to the Scot’s chagrin.

Rueda is the former coach of the Colombian under-20 side that finished third in the 2003 FIFA World Youth Championship. The Colombian national also led the under-17 side to a fourth place finished at the U-17 World Cup in the same year. He took charge of the Ecuadorians in 2010 after a four-year spell with Honduras.

Outsiders to qualify, Rueda has fashioned his squad of local and internationally based players into a fine outfit, especially at home. Captained by United’s Antonio Valenica, Ecuador finished the CONMEBOL campaign without losing in Quito, dropping points only to Argentina along the way. There is little pressure on La Tri to reach the latter stages in Brazil, although any progress beyond the second round will improve on Ecuador’s performances in 2002 and 2006.

United connection: Valencia will lead Ecuador at the 2014 tournament from a central midfield position. The flying winger was deeply effected by the death of friend and former team-mate Christian Benitez, whose number 11 shirt has now been retired.


Uruguay
Qualified: via play-off – fifth in the CONMEBOL with 25 points from 16 games
Manager: Óscar Tabárez

Veteran coach Tabárez is in his second spell in charge of the national team and took the Uruguayans to fourth place in the 2010 World Cup, which was followed by victory in Copa America the following year. Tabárez  has managed in Argentina, Colombia and Italy over an extensive career.

Tabárez’ outfit was forced to qualify via a one-sided international play-off against Jordan after finishing the CONMEBOL tournament in fifth place. It was quite a comedown for Los Charrúas who performed so well at the 2010 World Cup in South Africa. There is plenty of talent at Tabarez’ disposal, with Liverpool’s Luis Suárez joining Edinson Cavani in a potent attacking pairing. Gastón Ramírez, Nicolás Lodeiro, Cristian Rodríguez and Walter Gargano add genuine quality in midfield.

United connection: former United striker Diego Forlán will make Los Charrúas‘ squad for Brazil, although he is likely to start the tournament on the bench with Suárez and Cavani the prefered attacking duo.

Postecoglou was born in Athens, emigrating to Australia at the age of five. He enjoyed a modest playing career, before achieving greater success managing the young Socceroos, Brisbane Roar, and latterly Melbourne Victory.

This isn’t the finest Socceroos side to grace the World Cup, although qualification through the Asian tournament was achieved with just two defeats across 14 matches. With a world ranking of 57, there is little expectation that Australia will progress to the latter stages of the tournament.

United connection: United’s only ever Australian player, Mark Bosnich, played 38 games for the Reds across two spells with the club. Bosnich was later sacked by Chelsea for taking cocaine, yet took umbridge to Sir Alex Ferguson’s accusation of lack of professionalism in the Scot’s recent autobiography.

The much-travelled Queiroz took control of Iran in April 2011 after a traumatic spell with Portugal, which included a difficult qualifying campaign for World Cup 2010 and eventual defeat to Spain in the second round.

Queiroz has fashioned a robust Iranian side, which qualified comfortably ahead of the more fancied Koreans, but struggled to score goals in the second phase of the Asian tournament. Captain Javad Nekounam is the team’s creative heart, while Spanish-based Masoud Shojaei adds quality to Queiroz’ side. Iran will look to striker Karim Ansarifard to score the goals that will take the side beyond the group stages for the first time.


Japan
Qualified: top of Asia Group B, ahead of Australia
Manager: Alberto Zaccheroni

Veteran Zaccheroni has enjoyed a fine management career across the club and international game. The Italian secured a Serie A title with Milan in the late 1990s, together with the AFC Asian Cup in 2011 and the EAFF East Asian Cup last season. He has also managed Lazio, Inter, and Juventus.

Japan qualified with ease in the end, losing three matches across 14 in the Asia tournament. Yet, Zaccheroni’s side started slowly in securing just 10 points from a possible 18 in the first phase to fall behind Uzbekistan. However, the team grew markedly in confidence over the two-year qualifying campaign, adjusting to the Italian’s notoriously unconventional 3-4-3 system to make best use of attacking talents Shinji Kagawa, Shinji Okazaki, Yasuhito Endo and talisman Keisuke Honda.

United connection: Kagawa will start the tournament in a loose left-sided attacking role that contains none of the defensive restrictions placed on the playmaker by United manager Moyes. Still, Kagawa has complained that his international chances are being hampered by a less-than-regular starting spot with the Reds.

Former player Hong took charge of the Red Devils in June after the departure of Choi Kang-Hee. Hong earned 136 international caps in a stellar career, before taking charge of South Korean teams at the under-20 and under-23 levels.

Perennial qualifiers South Korea suffered a most traumatic road to the World Cup, finishing behind Iran Asia Group A after a poor campaign. Defeat to Lebanon in the penultimate second phase match left the Koreans needing to beat tiny Kuwait to progress in the Asian tournament at all. The campaign eventually cost Choi  his job and Korea’s World Cup place was only sealed on goal difference from Uzbekistan.

Much will rest on striker and captain Park Chuyoung, while in midfield Bolton Wanderers’ Lee Chungyong is a fixture on the right flank.

United connection: Park Ji-Sung has long since retired from the national team, although the former Red gained exactly 100 caps. Park appeared at the World Cup in 2002, 2006 and 2010.