There are moments in “Red”, Gary Neville’s autobiography, when you are reminded what an absolutely extraordinary career he, his brother and – as he never fails to refer to them – “Butty, Becks, Giggsy and Scholesey” had together. In the second batch of photographs included there is an image, captured in the dressing room before Neville’s testimonial, of the six of them with Sir Alex Ferguson, and I am ever so slightly ashamed to admit that seeing it again made me  well up. Six pals who have achieved extraordinary things, many of them together.

That this image had such a profound affect on me is perhaps not a great reflection of the quality of the prose. It feels a bit hacky to compare Red’s functional, consistent and only rarely exceptional style to its author’s playing career, but I am going to do it anyway, because it is just so appropriate.

Gary tells his story in strict chronological order, cataloguing the highs and lows of a career spent living out a childhood dream. The title is not an accident, the song sung throughout his career is true – Gary Neville really is a Red.

Spending a few hours in his literary company is enjoyable enough, because for any United fan it means spending a few hours on a pleasing trip through the incredible successes of the past twenty years. Incidentally, if you are not a United fan and have somehow stumbled across this review, I’m not sure Red is for you…

There is not much in the way of new insight in this book – the United way means being hard working, never complacent, and not knowing when you’re beaten. Sir Alex shouts at players when they don’t play well and occasionally they shout back and that never ends well. Eric Cantona was good.

The few titbits of new information I won’t share here because they are a rare treat to discover yourself. Generally speaking, in spite of the lack of sparkling prose, the momentum of United’s triumphs are entertaining enough to keep the reader engaged.

The momentum is only broken by the chapters covering Nev’s England career. Much like actually watching England’s underachievement on the pitch for the last 20 years, reading about it is pretty dull. If I’d played 85 times for my country, I’d probably devote a fair chunk of my career memoirs to it, but there are few surprises in his recanting of his time with the national team. Venables was good, Hoddle was tactically astute but a terrible man-manager, Sven’s reign started promisingly but then the indiscipline around the squad got out of hand. There is a chapter for each England manager – this could have been the work of a single chapter, and I would have been satiated.

“Red: My Autobiography” by Gary Neville is published by Bantam Press and available in hardcover now.

“Life With Sir Alex” by Will Tidey 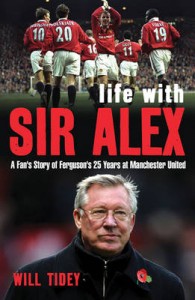 Tidey’s book, published in paperback by Bloomsbury, benefits and suffers from all chronicles of supporter experiences. Tidey’s prose draws readers into the action as if not solely recalling the experience but reliving it. The book is, after all, Tidey’s personal experiences of supporting the club since childhood.

These are emotions – the highs and lows of supporterdom – with which all Manchester United fans can identify. The preface to ‘My Life’ is a case in point, describing the explosion of passion and joy as Ole Gunnar-Solskjaer’s flicked winner lit the fires of joy at Camp Nou in 1999. It was the seminal moment of Sir Alex Ferguson’s time in charge of United.

But Tidey’s work also is recollection of events over the course of 25 years of Ferguson’s tenure at Old Trafford, and in strict chronilogical order at that. There is much to enjoy in the many victories; plenty to rue in the defeats. Each has made Ferguson’s time at Old Trafford so memorable. Tidey’s work is also a remembrance of the minutiae, as well as the improbably glorious. There are moments that the reader will simply have forgotten, or placed in the deep recesses of memory at least. There is joy in that too.

And yet for all that there is nothing particularly revelatory here. Why should there be? Tidey’s work, almost a personal diary over a quarter of a century, was never intended to be. Passionate, witty and smart, Tidey neatly sums up the fans-eye view of Ferguson’s time at Old Trafford. For that, it is well worth the read.

“Life with Sir Alex” by Will Tidey is published by Bloomsbury and available in paperback now.