It’s ridiculous, when you think about it. Six mates, two of them literal brothers, the rest of them brothers in all but blood are possessed of a profoundly driven will to win and a deep personal love of a football club. They learn their trade together, bonded forever by their experience, and then they set about winning absolutely everything. How appropriate, then, that the people behind the “The Class of ‘92” have set about making a cinematic documentary out of the story, given that it could so easily be the plot of a perfect Hollywood ‘sports’ movie.

We all know the story of the class of ’92, but we have never seen it told quite like this. We may have had front row seats as it unfolded, marvelling in their triumphs as they gave us most of the greatest moments (and unquestionably the single greatest of all of them) of our football supporting lives, but this is essentially a backstage pass – finally free of the media machine, the film shows them more relaxed than they have ever been allowed to be, in public.

I am deliberately avoiding sharing anecdotes from the film in this review, as for those of us who know every iota of the plot details already, the anecdotes are the draw, and what a draw they are. They are beautifully captured – one-to-one talking heads with each of the players, with some genuine personal moments, and quite a lot of what people mean when they say “banter” in a non-pejorative way.

The dinner table scene, returned to again and again as the story plays out is an absolute joy to behold. I think most of us know that Paul Scholes is secretly funny, and he really is, but Ryan Giggs steals the show. The devil might have all the best tunes, but the Red Devils have all the best lines.

When speaking with one of the Directors, Ben Turner, for this Friday’s podcast, he said that the filmmakers were concerned with ensuring that the story would be cinematic, and accessible and interesting to a non-Manchester United supporting fanbase, as well as providing a deep enough experience to satisfy hardened reds. They are mostly successful; for those of us who lived through the story the first time around, it is nostalgic bliss, and for those unfortunate enough to support other football teams, the film looks lovely and the soundtrack is perfect.

There are a lot of efforts to set the rise of the class of ’92 into the wider context of 1990s Britain, and the sense of youth and optimism that genuinely pervaded at the time. The best aspects of this cultural contextualisation take the form of the soundtrack – heavy on the Stone Roses, as it very, very much should be. The worst come in the voices from outside football. Perhaps understandably, the bits not aimed at hardened reds are the bits I enjoyed least.

I have heard Danny Boyle talk about the sense of optimism in 90s Britain enough not to find it of particular value here, but at least that was not offensive. I found the inclusion of Tony Blair somewhat more dubious. Turner made the point that Blair represents a huge turning point in the relationship between British politics and football, and this is fair enough, but there is something painfully ironic about watching Blair talking about an optimism that he essentially destroyed in throwing our lot in with the Bush regime. Much as documentaries about the optimism of the sixties end with assassinations and the Vietnam war, so nineties optimism ends with Afghanistan and Iraq. 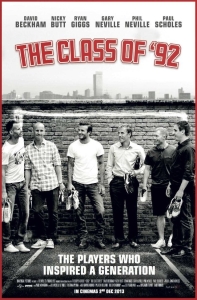 But enough about politics. There is mercifully not that much of Blair. Who wants to listen to him when you can listen to Eric Cantona talking about the joy of seeing the greatest crop of United players for forty years coming through the ranks together? When you can listen to Mani talking about trying to get tickets to the ’99 final? When you can watch the people who wrote the greatest sporting story of the modern age together look back and laugh and tell you what they really think of each other and the people around them?

The Class of ’92 is a wonderful film, it really is. It wouldn’t be quite as wonderful if I wasn’t a Red (but then again, what would?), but there is definitely enough in there to keep anyone with a passing interest in stories of profound human triumph involved. And for those of us who have been with the class of ’92 since rumours of a player who might be “better than Lee Sharpe” started to emerge from The Cliff, the fact that their story has been told with such love and respect makes for an unforgettable 90 minutes. Something that Giggs and Scholes, David Beckham, Nicky Butt, Phil and Gary Neville know about only too well.

The Class Of ’92 is out in selected cinemas on the 1st December and DVD on the 2nd December.