Rooney will break Charlton’s record and here’s when…

It is surely no longer a matter of if but when Wayne Rooney breaks Sir Bobby Charlton’s Manchester United goalscoring record, with the 25-year-old striker beginning this season in impressive form. Rooney is now less than 100 goals from the 249-goal target set by  Charlton, which has stood since the United legend retired in 1973. Rooney now has 153 goals in all competitions, with only Denis Law and Jack Rowley having also scored more than 200 goals in all competitions for the Old Trafford club.

Indeed, such is Rooney’s form that a repeat of the striker’s 34-goal 2009/10 season will lift the Scouser above George Best and Dennis Viollet to fourth on United’s all-time scoring charts. Rooney has passed Paul Scholes and Ruud van Nistelrooy in the list this campaign, having scored nine goals in eight competitive games for the club.

But when Rooney eventually passes Charlton’s record depends on a number of mitigating factors including form, fitness and whether the player’s talent begins to deteriorate, with the former-Evertonian far from the Ryan Giggs-esque model professional off-the-field.

“I do [think Rooney can beat the record],” Ferguson told club rag<em>Inside United</em>.

“He is only 25 years of age, so you’d think he has at least another five years in him at the very top level. And if he looks after himself like Ryan Giggs has done, he could play well into his 30s. The opportunity is there and time is on his side. He’s raced out of the blocks already this season and I hope he could get up to around the 30 mark.”

In this spirit Rant has tracked Rooney’s past performances for United, taking into account the average number of games, goals and goalscoring ratio for the club over seven seasons. Predicting the future is, of course, a ‘mug’s game’ but one Rant takes on in any case. Envisioning three potential scenarios, Rant estimates that the striker will become United’s greatest ever goalscorer before the end of the 2014/15 season – but only if Rooney’s current renaissance continues.

At the other end of the performance spectrum, if Rooney’s goalscoring tails off with age, injury or another bout marital/tabloid strife –  or another offer from Manchester City cynics might add – it could take the player until past the 2015-16 campaign to reach Charlton’s record, if at all.

But first let’s take a look at Rooney’s performances for United to date, which although lumpy in terms of absolute numbers in any given season, demonstrate a remarkable goals-to-games consistency during seven full seasons at the club.

Chart 1, below, shows that on average Rooney records a goals-to-games ratio of around 0.46. Or in other words: very close to a goal every other game for United. This record includes both the player’s remarkable 2009/10 campaign, and the injury/scandal affected season last time out. 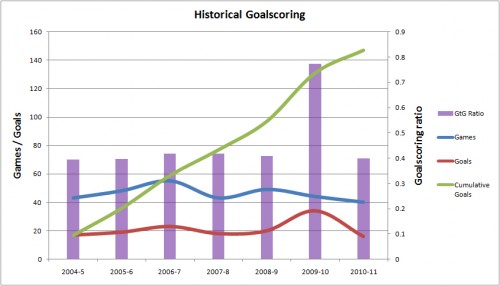 Recalling the three hypothetical scenarios for Rooney’s future goalscoring, Rant adjusts predicted future performance based on the striker’s past. Will the former Evertonian continue the current renaissance, perform in-line with historical precedent or deteriorate over the following seasons? Rant’s predictions are, of course, little more than fun, if educated guesswork.

In the renaissance scenario – see chart below – the former Evertonian increases his historical goalscoring record over the next six years, and remains fit and scandal free for the foreseeable future. Here, Rant has assumed that Rooney’s excellent start to the current season continues, predicting a 0.77 goals-to-games goalscoring ratio by the end of the campaign, much as the player achieved in 2009-10. In this Rant has guesstimated the number of games played over the season at 46, including substitute appearances, which is Rooney’s historical average for the club.

In following seasons Rant assumes that Rooney – on average – will not continue to score at a 0.77 ratio, but that he will improve his average to around 0.55. This is little more than a guess but realistic stretch-goal based on historical numbers. 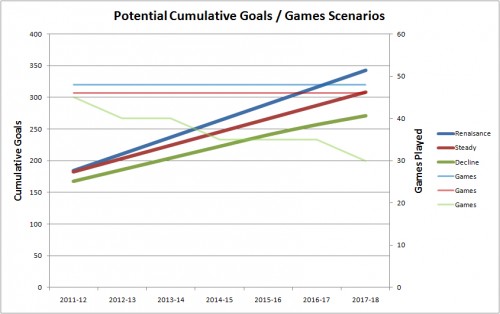 In the static scenario – chart above – Rant extrapolates Rooney’s historical 0.46 goals-to-games ratio and average games played per season across the next six seasons. This results in a perfectly linear growth in cumulative goals, which is, of course, unrealistic as Rooney’s performance over each the next six years will never be a mirror of the previous. The point is clear nonetheless.

Finally, in the deterioration scenario – also in chart above – Rooney performs solidly this season before returning to historical averages in the immediate following campaigns. Worse still, as age, deteriorating fitness and poor career management catch up – see drinking, smoking, sleeping with hookers – Rooney’s total number of games per season and goals-to-games ratio fall below the current average. Even in this scenario Rooney will break Charlton’s goalscoring record if he remains at Old Trafford past his 31st birthday.

The scenarios painted are, of course, little more than fun. The more serious point is that unless fitness, scandal or contract rebellion get in the way, Rooney is almost certain to become United’s highest ever goalscorer before his current deal runs its full course. This is some accolade for a scruffy kid from Croxteth, who became Britain’s most expensive teenager, an Old Trafford hero, a contract rebel and a tabloid scandal-magnet.