Manchester United owners the Glazer family has struck a secret multi-million pound deal with PepsiCo to rename Old Trafford. The deal, which will come into effect from the start of the 2012-13 season, will bring more than £400 million into the club coffers over the next 10 years, a source close to the deal exclusively revealed to United Rant this week.

United’s home stadium since 1910 will be renamed ‘Pepsi Cola Old Trafford’ from August 2012, according to documents seen by Rant, and then simply Pepsi Field from 2015. The deal does not initially include shirt sponsorship, although Pepsi is believed to have an option to take over shirt sponsorship from AON, when United’s deal with the insurance firm concludes in three years. It could push the total value of the deal to more than £60 million per season.

The historic deal, brokered by United’s London-based commercial team headed by Edward Woodward, will be greeted with delight by United’s bean counters, while it will likely draw anger from those supporters opposed to changing more than 100 years of Old Trafford history.

Secret talks with the giant New York-based American soft drinks and snacks company, which turned over more than $57 billion in 2010, have been taking place for more than six months the source told Rant. PepsiCo Europe is said to have day-to-day responsibility for the groundbreaking sponsorship, although New York senior management were required to signed off on the deal, which is believed to be the biggest of its kind in football.

“Make no mistake this is a done deal,” the source, who did not want to be named, told Rant.

“The Glazer family is secretly delighted with the deal, although they know that it will bring an angry reaction from some fans’ groups. But just as the Green and Gold protest has gone away, the Glazers know that as long as Sir Alex Ferguson keeps delivering results on the pitch, commercial activity will be unaffected by fans’ complaints.

“Pepsi is one of the most active American companies in sports sponsorship, but rarely outside of North America. This is a strategic move for the company to build an even bigger global audience. United has been tracking this deal for months, perhaps even years. Joel Glazer pulled out all the stops to seal it.” 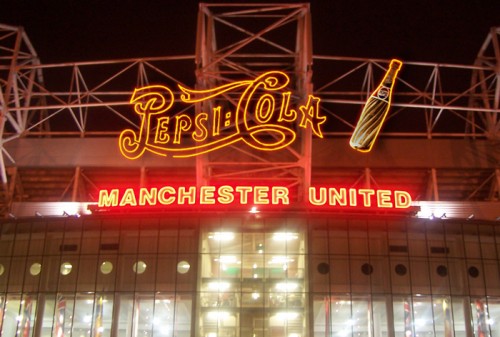 Meanwhile, the Glazers are still believed to be planning an IPO in Asian in autumn 2012, seeking $1 billion for up to 30 per cent of the family’s stock. United remains more than £400 million in debt, with supporters’ groups estimating that up to half a billion pounds has been spent on debt repayment, interest and other fees by the Glazers since the family’s controversial 2005 takeover.

“The IPO will go ahead, but only on the Glazers terms,” said the source, who is intimate with United’s commercial machinery.

“The deal with Pepsi, the float, it’s part of the family’s plan to ensures that the Glazers can send much of the IPO gains back to the States, while still growing United’s commercial revenue. On the field you’ll eventually see United wearing Pepsi shirts, drinking Gatorade drinks and touring whatever markets Pepsi needs to break, especially Africa, India and China. It’ll be the ‘Pepsi Manchester Globetrotters’, but at least the players won’t be thirsty on their travels.”

Naming rights are a widespread phenomenon in north American, even for established stadia, but far less common in Europe. Both Arsenal’s home at the ‘Emirates’ and Manchester City’s Etihad Campus were new, or relatively new builds. Meanwhile, Newcastle United owner Mike Ashley courted controversy, renaming St James’ Park the Sports Direct Arena. Indeed, supports recently defaced the Sports Direct signage, while refusing to use the new name. However, most media outlets have reverted to the new branding.

“Old Trafford is an iconic name, with more than a century of history, but such is the longevity of the deal with Pepsi that it will eventually disappear,” said Olaf Priol, Director of Sports Business Group, Deloitte.

“The Glazers are playing the long game. They know that this will bring anger, but fans have been angry for six years and what has it achieved. The family has struck a huge deal that will boost the club’s enterprise value just months short of floatation.

“Fans might be angry at losing the Old Trafford name, but the Glazers will be thinking ‘Screw the fans, United just won the Pepsi Challenge’.”