The response to United Rant’s ‘Subbuteo Art’ competition was resoundingly positive, with hundreds of suggestions, ultimately spawning over 60 unique and novel ideas. Many iconic moments, including Matthew Simmons’ attempt to headbutt Cantona’s boot, were proposed on countless occasions, so those who came up with the new idea first were entered into the competition. Many more suggestions had already been Subbuteised by Terry Lee, craftsman par excellence.

It proved extremely challenging to judge the winners, and in all honesty, any three of the 63 – individually listed at the bottom of this article for those interested – could have been selected. Determining an ‘iconic’ moment is a particularly subjective matter for any football fan, with specific episodes holding places in our hearts to varying degrees, and for differing reasons. It might be a moment witnessed live, shared with someone special, or a during a fond period in our lives.

The winning entries are based loosely on the following criteria;

Congratulations to the trio of winners, who will all be sent their customized (first-of-its-kind) Subbuteo piece by the end of February. 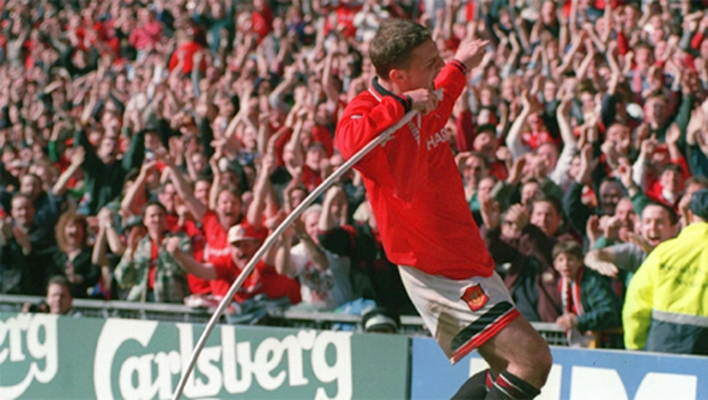 Sharpey was probably the first glamour player of this generation’s formative years. Sandwiched in between Danny Wallace and Ryan Giggs on the left, Sharpe came to prominence during the 90-91 season, fast becoming one of the most enthralling prospects on the scene. Even when a Giggs assumed the mantle on the left berth, many fans were adamant that Lee could have potentially proven an equally majestic player. Alas, his career was cruelly hindered by a combination of injury and illness.

But the majority of Reds remember Lee with endearment, not only for his raw footballing ability and cultured left-foot, but also his joie de vivre, manifested most vividly through his imaginative goal celebrations. When he wasn’t devising his own dance routines such as the “Sharpey Shuffle” – the ’90s infinitely more creative version of Gangnam Style –  he was impersonating Rock ‘N’ Roll royalty, inventively supplanting corner-flag for microphone. Oh how we “Love Lee Tender.”

Whilst his reputation as a bon vivant away from the pitch ingratiated him to the fans, it may ultimately have proven his undoing with the head honcho. Lee was famously scolded by Sir Alex Ferguson for leading a fledgling Giggs astray at a house party. It’s amongst the numerous anecdotes Sharpe recounts with aplomb if you get the chance to attend one of his guest speaker appearances.

This amorous embrace transpired following Scholes’ last minute-winner at the Etihad Stadium versus another team in the vicinity who like to make a din. Marvel at its majesty; an instance of platonic puckering up that animated even the most heterosexual of United fans. It doesn’t matter how alpha you are, you cannot but enjoy the sight.

The two men from the “Class of ’92” are polar opposites personality-wise, but shared a passion for their club and everything it represents. G Nev elicited from Scholesey this manifestation of love for United, which ordinarily remained latent, and we are eternally indebted to Gary for it.

It was a spectacle to behold at the culmination of the ’99 Champions League Final: 6’3″ Peter Schmeichel defying gravity by making his own mammoth frame revolve 360 degrees – to mark the most dramatic comeback in the beautiful game’s illustrious history. It was an explosion of sheer cartwheeling joy from The Great Dane, perfectly encapsulating the unadulterated relief experienced by every single United fan at the precise moment, whilst leaving us more rotund Reds to stick to our metaphorical internal cartwheels of elation.