The art of Subbuteo

Released in the 1940s, and surging to prominence in the ’60s, Subbuteo harkens back to a simpler, more innocent, arguably more beautiful epoch, particularly when discussing the beautiful game. And this pertains to football both on- and off the field.

On the pitch, diving was less prevalent – if not non-existent – reflecting the sturdier moral rectitude of the players, and perhaps society. Additionally, the notion of a one-club servant was commonplace, underscoring the importance of loyalty.

Away from the pitch, modest wages seemingly kept the players honest. That is by no means to intimate that every player of yore was a beacon of saintliness, but generally they appeared to be less affected and more upstanding citizens than a number of their contemporary counterparts.

And even the manner in which everyday fans endeavor to emulate our heroes has evolved – perhaps devolved, depending on your perspective – remarkably. Young folk of yesteryear would flick around little 3D men, and communicate with fellow humans partaking in the game, who were actually present in the same room. All prior to the advent of computer games. This is not to demonise technology, but Subbuteo very much constitutes a real, offline experience as opposed to gaming; a virtual pastime.

Over the decades, Subbuteo has progressively become ingrained into the nation’s footballing psyche. It’s now firmly solidified its position as a national heritage game, and can simultaneously draw upon its cool retro appeal, increasingly important in a materialistic era when people wistfully yearn for meaningful anachronisms.

That considerable appeal is not lost on Terry Lee, founder of Subbuteo Art, who has established a business hand-crafting customized Subbuteo pieces. “Immortalizing iconic football moments in Subbuteo” is how Lee dubs his work. 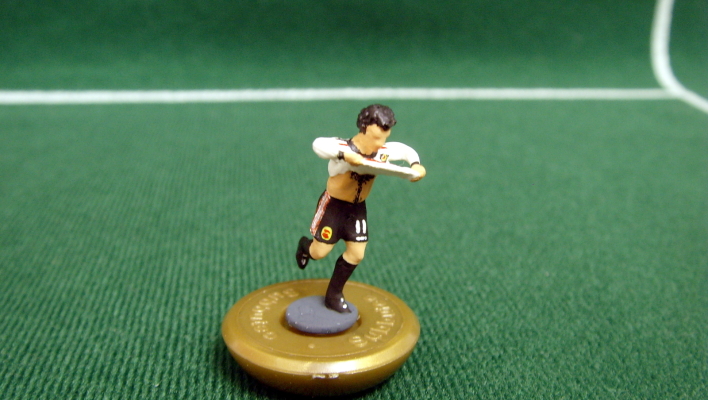 JS: You’re a Villa fan I believe. As a non-MUFC fan, how are you viewing Moyes’ tenure so far, and MUFC fans’ reaction to him?

TL: I believe David Moyes is the right man for the job. Sir Alex Ferguson’s legacy is immense; a near impossible task for any manager, and MUFC need to stick with their new manager. Today, football managers are too quickly shown the door; the fans need to look long-term and Moyes is a manager that can be with United for 10-15 years. 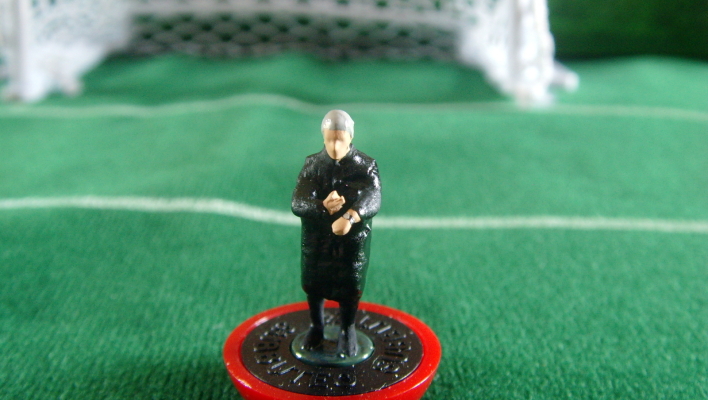 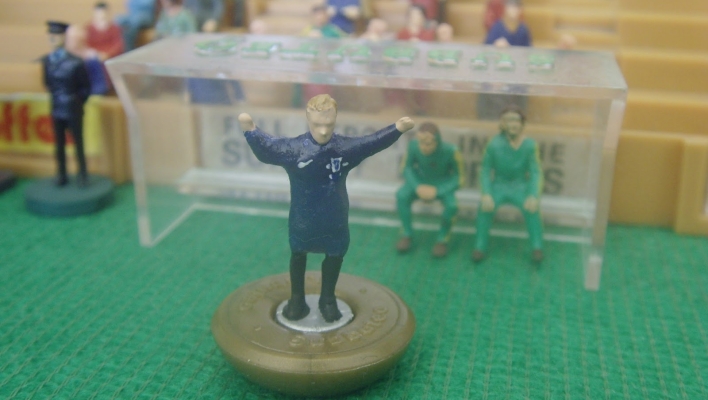 A Moyesey Moment (at Everton)

JS: How do you view the current MUFC squad – are there any players in particular that you fear playing against, or any players that don’t worry you at all?

TL: The MUFC squad is a fantastic mix of experience and youth. There are many young players coming through that you can see have the United quality about them. As a Villa fan it is fair to say we fear all players at the moment. I love my Villa but the club is going through a very rough patch this last few years. 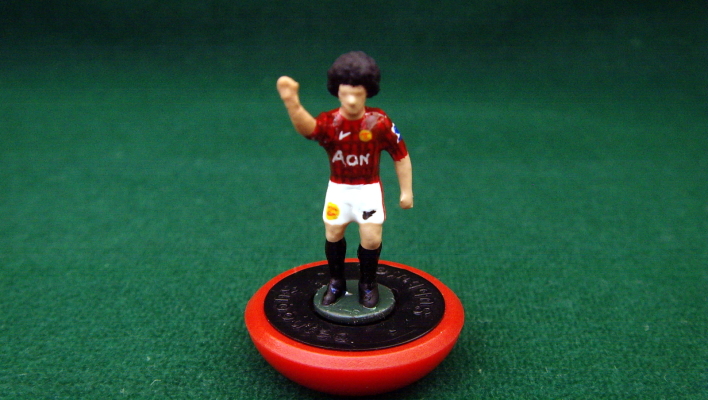 JS: In your opinion, who’s the best ex-MUFC player to have later played for Villa and vice-versa?

TL: My personal favourites who arrived from United would have to be Peter Schmeichel and Paul McGrath. We were blessed having a player of Paul McGrath’s caliber; a truly outstanding player. The obvious player to leave Villa for United can only be Dwight Yorke, a great player for Villa and an amazing player for United. No supporter wants to see a great player leave but you can understand their reasons when United comes knocking. Dwight Yorke was a great loss.

JS: From what you’d seen of Ashley Young at Villa, did you think he’d prove good enough to make it at United? Based on what you’ve seen of him at United, is your opinion the same?

TL: I believe Young should have stayed at Villa, just like Stuart Downing, Gareth Barry and James Milner. What a great midfield we could have had. But I can fully understand him wanting to join United; who wouldn’t?! I do believe he shone so much more at Villa though, and never really got off the ground at United. You see it a lot nowadays when a key player for one team becomes a fringe player at a bigger club. Ashley could have been a long-standing hero at Villa but sadly he will soon be forgotten by United fans. I would just like to say I am a huge fan of his and his connection with Gabby Agbonlahor was magical.

JS: Moving onto Subbuteo, has it always been a hobby/interest of yours? I believe there are proper tournaments held; have you ever played it at a decent level?

TL: I have always been a fan of Subbuteo since my first set as a child, but I have never entered any tournaments because I’m not that good!

JS: What is it about Subbuteo that appeals to you?

TL:  It is a British institution. I love the fact that you can re-enact all your favourite footballing moments and it is a hands-on experience instead of all the footballing computer games there are now. There were hundreds of teams made over the years and you could find and learn about teams you had never heard of previously. I love the paintwork of the Subbuteo figures pre-’80s when each figure was hand painted by locals in the area. 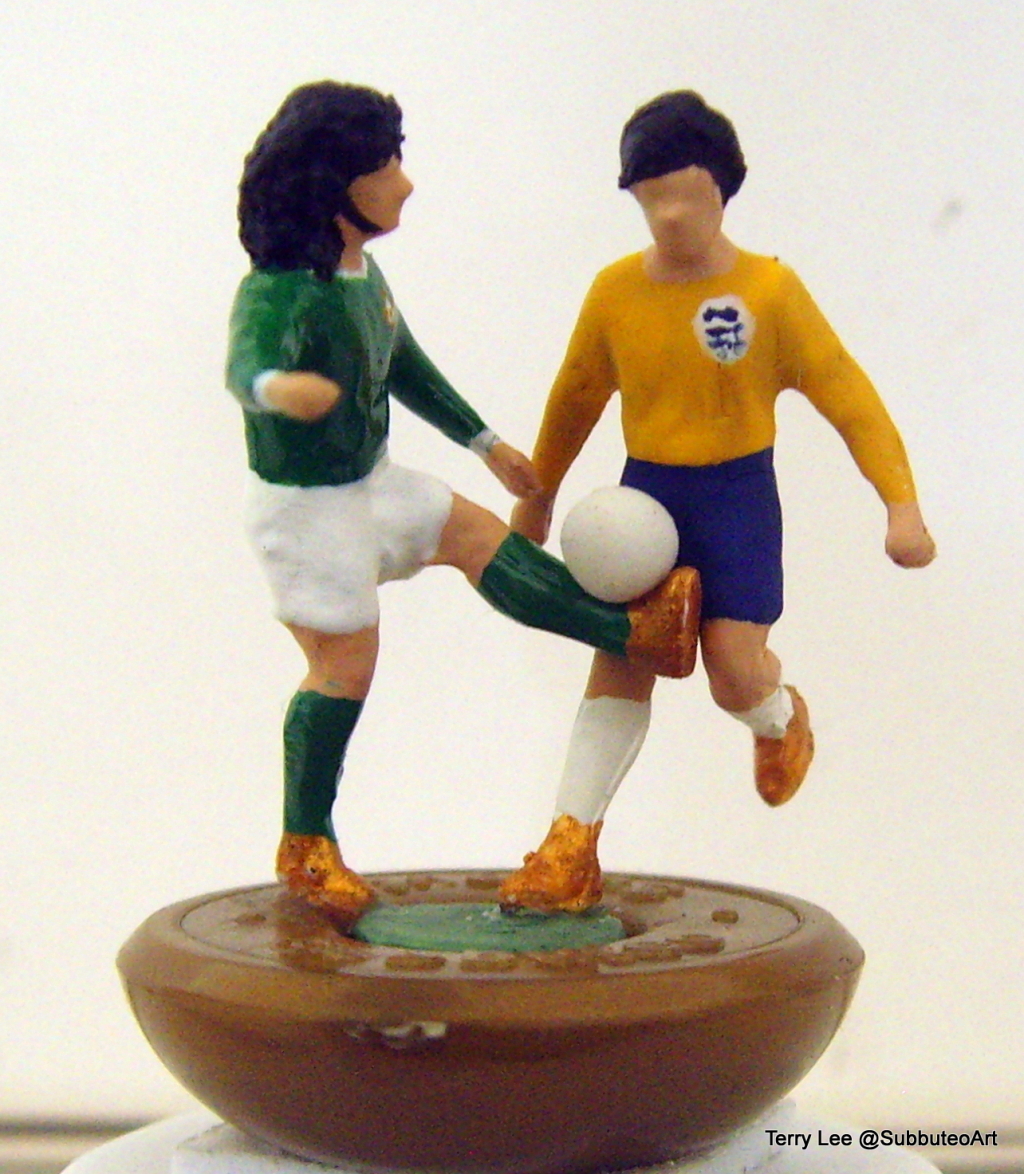 JS: You allude to computer games. In the face of kids now growing up playing computer games, do you believe the fact that Subbuteo is an embedded institution increases its prospects of longevity?

TL: Computer games and kids go hand-in-hand in today’s world; nothing will change this as technology is always progressing and more time is spent now in front of computers and on mobiles.  I am 31-years-old and I’m also guilty of spending too much time in front of a computer screen, although not playing games. Subbuteo will always be a part of many peoples’ lives and is still being passed down through families. Subbuteo is on the rise and hopefully with the World Cup coming up we will see more youngsters asking for Subbuteo sets and playing out their own versions of Brazil 2014. 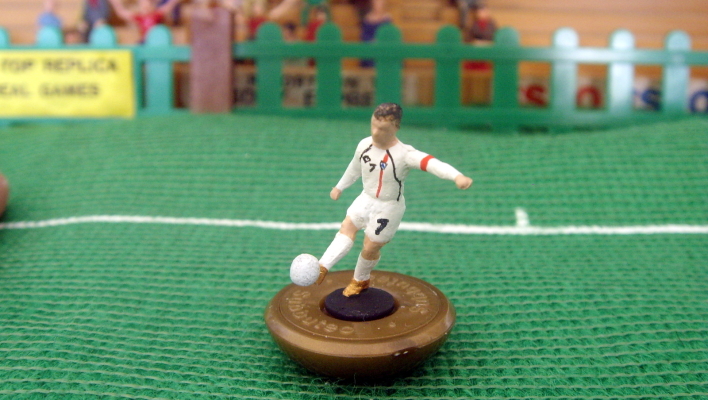 JS: How did you come to create customised Subutteo pieces? Is it purely a commercial venture, or are you genuinely passionate about the craft involved?

TL: It all started from recycling broken Subbuteo pieces; I had painted teams before but saw an opportunity to create iconic single figures that people would like to collect. I am deeply passionate about Subbuteo Art and everything that comes with it; from creating, painting and glazing of the miniature figures to the emails, tweets and sending the figures worldwide. 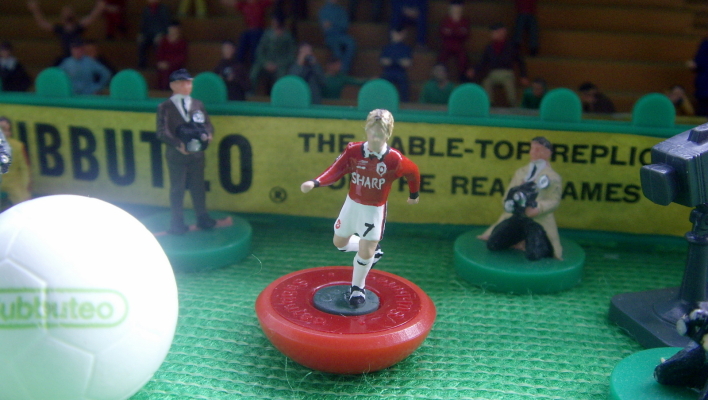 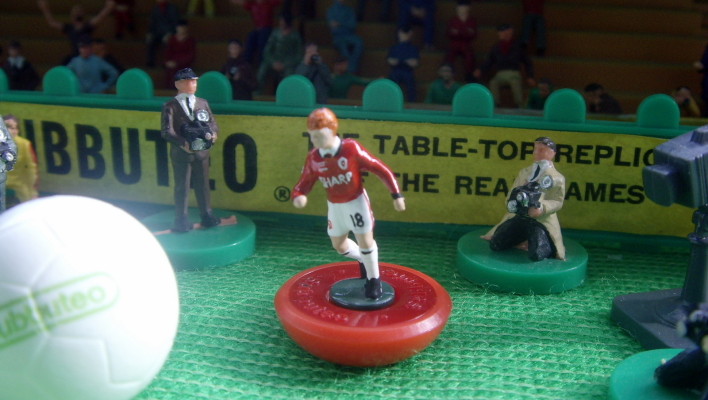 JS: Are you the world’s only Subbuteo artiste, as far as you’re aware?

TL: As far as I am aware I am the only Subbuteo artiste who creates the iconic moments in football. There are numerous painters of Subbuteo teams but very, very few of these use Subbuteo products.

JS: Is Subbuteo a global game? Do you get many requests from abroad to create bespoke figures?

TL: Subbuteo is global; I have requests from all over the world. My main market is Europe but there are many, many requests from Asia, Australia and the Americas. 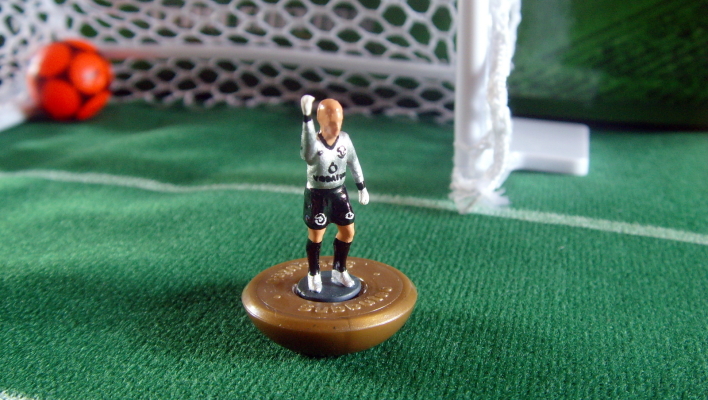 JS: What’s the most random or abstract  fun figure you’ve been asked to create?

TL: The most random figure must be a custom figure I made of a Subbuteo fan in his work uniform taking his dog for a walk. I was also once asked to create pieces of Pep Guardiola and Jose Mourinho playing Subbuteo. 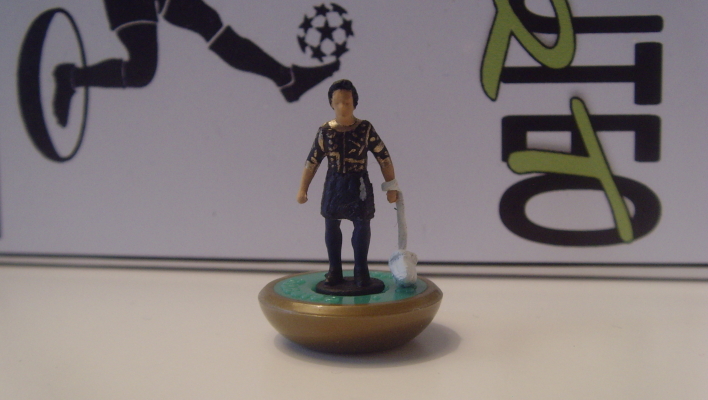 JS: What’s the most requested figure you get asked for?

TL: The most requested figures are Rene Higuita and Arsene Wenger. Of the United figures, Wayne Rooney’s overhead kick followed by ‘Fergie Time’.

JS: Are there any figures that have proven been particularly tricky to recreate, or that you couldn’t actually manage?

TL: So far I have been able to create all figures that have been requested. The trickiest must be the Gazza ‘dentist chair’ figure with four figures on one base, and all the figures needing manipulating in some form.

JS: Any MUFC-related requests that stand out in your memory?

There is a very recent request of the Ole Gunnar Solskjaer knee slide in the 1999 Champions League final. This stands out only because I can’t believe it has never been requested before. Such an iconic moment for every United fan. I see this piece being very popular with the collectors. 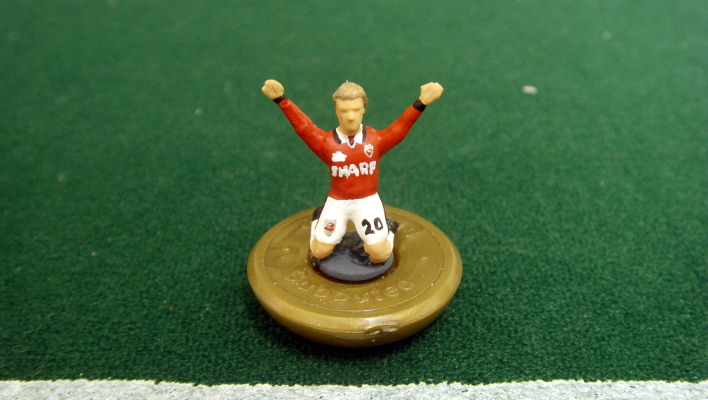 JS: Have you ever showcased your work at an arts’ fair or museum etc?

TL: Not as of yet, but hopefully in the future I will have some larger displays of iconic footballing moments showcased. 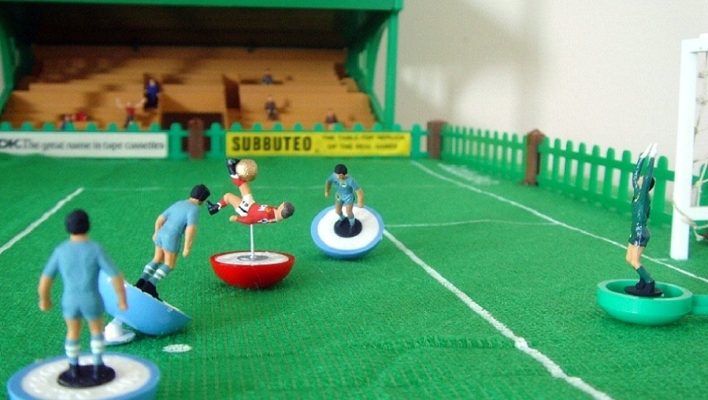 JS: I sincerely hope so too. Your work certainly warrants such exposure. Has anybody high-profile within the game (player, manager, media member, fan) ever contacted you or commented upon your work?

TL: There have been a few so far and interest from the media, players and mangers is steadily growing. To date, Romario – an idol of mine – has two figures I created for him and was kind enough to send me signed photos of himself holding the figures, and also a signed Brazil shirt. John Sheridan also kindly sent me a photo holding a figure of himself. Tim Cahill has recently shown interest and I am hoping to get a figure out to him soon. There are also quite a few high profile ex-international footballers from Europe and South America that will hopefully be seen with Subbuteo Art figures in the coming future. 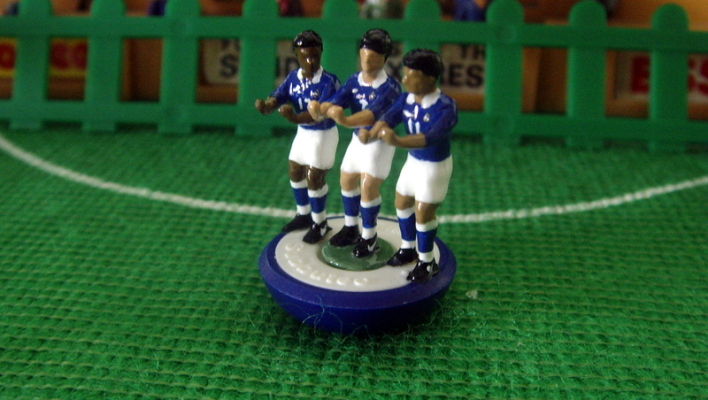 JS: I imagine Cahill will want one of himself sparring the corner flag, his hallmark celebration. Well cheers for your time today Terry, and your work is magnificent. You may have discerned this by the number of orders I’ve recently placed!

TL: Haha, no worries Jonny, many thanks.

In conjunction with this interview, Jonathan and Terry are running a competition. Terry’s existing MUFC-related pieces are interspersed throughout this interview post, so the challenge for you is to propose an iconic MUFC moment for Terry to immortalize in Subbuteo (Subbutealize?)

The best suggestion will have his/her piece custom-made and sent by Terry. Please leave your ideas in the comments section below the interview – or on Twitter (please use hashtag #unitedrant and @unitedrant @JonathanShrager so we can find your entry)

For anybody interested in Terry’s work, he can be contacted at ;

22 thoughts on “The art of Subbuteo”