United Rant’s fixtures wallpaper for the 2015/16 season, available in three sizes. Right click the thumbnail and save as…

Download United Rant’s fixtures wallpaper for the 2012/13 season. This wallpaper will be updated with fixture dates when TV schedules are confirmed, and cup game dates/fixtures when known. The wallpapers are available in three sizes: huge, wide and large! 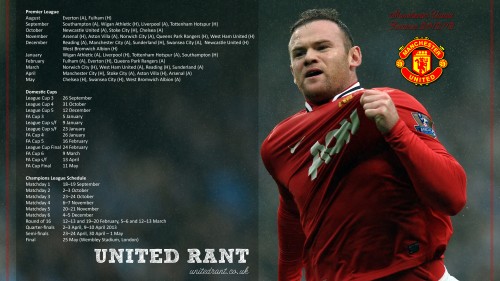 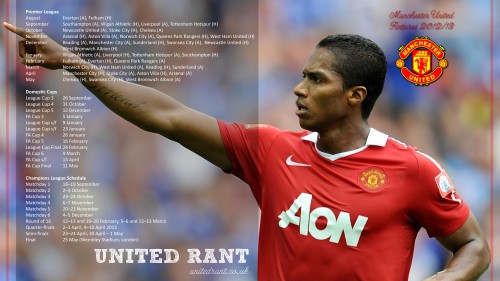 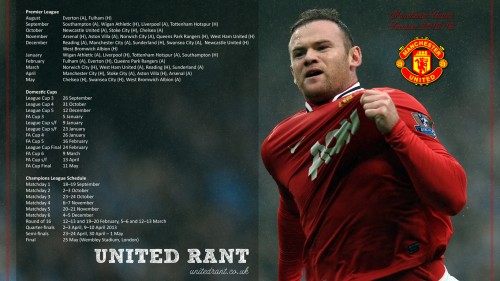 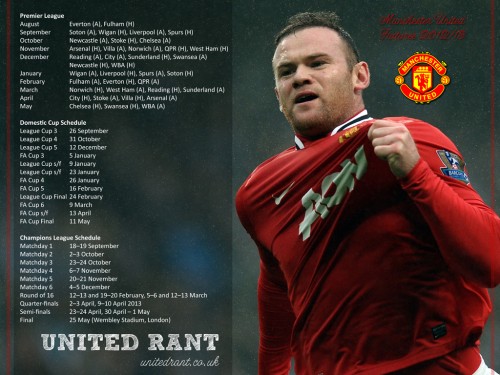 United get Everton in season opener

Sir Alex Fergsuon’s Manchester United will face Everton at Goodison Park to open the new Premier League season after the fixtures for the 2012/13 campaign were unveiled Monday morning. Last season’s runners-up will face David Moyes’ Toffees, Fulham and newly promoted Southampton before August is out as United aim for a 20th English title. The opening day is scheduled for Saturday 18 August, but Ferguson’s side is more likely to take up one of the televised slots either on Saturday lunchtime, Sunday afternoon or Monday night.

The first home tie of the season will bring Fulham to Old Trafford in August, with fixtures against Southampton, Wigan Athletic, Liverpool and Tottenham Hotspur before the end of September. However, the draw offers Ferguson’s side a tough looking run-in, with fixtures against Manchester City, Arsenal and Chelsea in the last two months of the season, including a potentially decisive fixture with Roberto Mancini’s outfit at Old Trafford.

The season’s first derby is at Eastlands on 8 December, while United travel to Liverpool on 22 September, visit Chelsea on 27 October and host Arsenal a week later on 3 November. United also faces a busy Christmas and New Year period with fixtures against Swansea City, then Newcastle United on Boxing Day, West Bromwich Albion, and then Wigan Athletic in the traditional ‘hang over fixture’ on New Year’s Day.

United’s last home fixture of the season, possibly the final game in Red for Paul Scholes and Ryan Giggs, brings Welsh side Swansea City to Old Trafford, before United conclude the campaign away at West Bromwich Albion.

By then United will hope to have secured the Premier League title, although few will bet against more last day drama. And on balance Ferguson will be pleased with the fixture split, which offers neither a hugely tough start to the campaign, nor the worst possible conclusion.

The Champions League draw takes place in Monaco on 30 August, and while specific European destinations are yet to be unveiled, United will face fixtures away from Old Trafford after five of six group games – traveling to Liverpool, Newcastle, Chelsea, Aston Villa and City after European games .

With just two months until the season opener United’s schedule already looks packed. The Reds start a summer tour a month today, with two fixtures in South Africa against AmaZulu FC and Ajax Cape Town, one in China with Shanghai Shenhua, and one in Norway against Vålerenga.

Players not competing in the European Champions are due to report back for training on 1 July.

Want a free fixtures wallpaper? Want it to include last season’s goal of the year? Want it to fit your computer screen? Then look no further than these Rant wallpapers. Click for a preview, right-click and “save as..” to download. 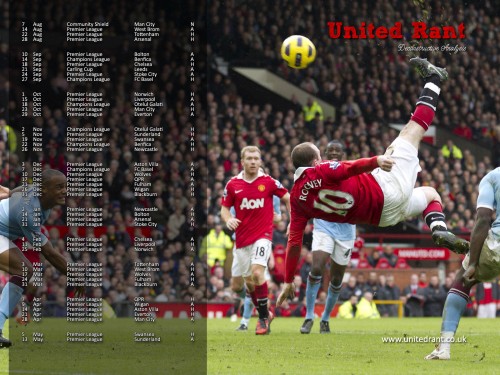 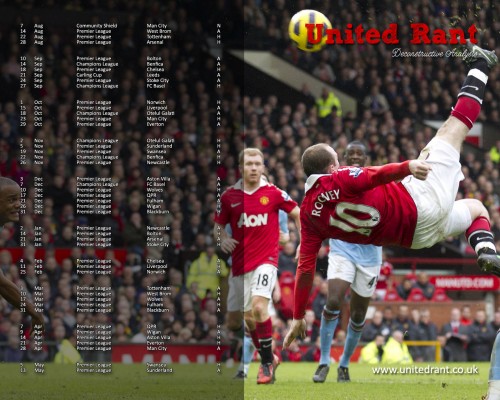 Manchester United will open the new Premier League season against Roy ‘Woy’ Hodgson’s West Bromwich Albion at the Hawthornes in what might prove to be a season of two distinct halves. Sir Alex Ferguson’s team faces a tough start to the season, with seven matches against direct title rivals before mid-February, but just one match against teams searching for Premier League glory during the run-in.

The Scot’s side will play three tough fixtures against direct rivals adjacent to Champions League groups stage matches, with Ferguson surely hoping for home European games when the draw takes place on 25 August.

The Champions League quarter and semi-finals are likely to be next to games against Fulham, Blackburn Rovers, QPR, Aston Villa and Everton. Only the match with City on 28 April 2012 at Eastlands, which backs on to the second leg of the Champions League semi-final should United make it that far, will concern Ferguson.

But it is the season’s end that will get Ferguson purring with only that City fixture likely to be against a direct rival for the Premier League title. March, April and May will bring games against likely relegation candidates including Swansea, Wigan Athletic, Blackburn, Wolverhampton Wanderers and QPR.

Rant would bring you a full fixture list but the Premier League, via the Football Data Co., insists that even not-for-profit blogs such as this site buy an annual license at the cost of several hundred pounds.

Manchester United will begin the Premier League season on Monday 16 August after Sky TV moved the club’s fixture with Newcastle United. The opening game takes place at 8pm and is the first in the return of Monday night football on Sky. Eight United games have been moved by Sky or ESPN for TV coverage prior to Christmas.

United’s fixture with Fulham at Craven Cottage will now take place at 4pm on Sunday 22 August, Everton away has been shifted to 1.30pm on 12 September and Liverpool at home a week later also takes place at lunchtime. The first derby of the season is set for an 8pm kick-off at Eastlands on Wednesday 10 November.

Never popular with United supporters, Sir Alex Ferguson will be grateful that the 8pm Monday night game is at least at home, although that’s of little comfort to Newcastle supporters who face a four hour trip home after the fixture.

Sky has rights to five out of six football packs auctioned by the Premier League under the new TV contract, with ESPN showing the remaining televised fixtures.

The US-based network has moved United’s fixtures with West Ham United to Saturday 28 August, Bolton Wanderers to 25 September and Tottenham Hotspur to Saturday 30 October, with all games kicking off at 5:30pm.

Fixtures for United’s post-Christmas fixtures will be announced later in the season.

United get Geordies in opening fixture

Sir Alex Ferguson’s Manchester United will play Chris Houghton’s Newcastle United at Old Trafford on the opening day of the Premier League season, which kicks of on 14 August. Ferguson’s men will then travel to London to face Fulham at  Craven Cottage before playing West Ham United back in Manchester during the first week of the season.

Champions Chelsea face West Bromwich Albion in the Midlands on opening day, Manchester City go to Champions League qualifiers Tottenham Hotsport while Arsenal and Liverpool play each other at Anfield.

Other notable fixtures include the derbies against Manchester City on 10 November at Eastlands and the return at Old Trafford on 12 February 2011. United face Liverpool at home early in the season on 18 September and then at Anfield on 5 March. Meanwhile London sides Arsenal and Chelsea come to Old Trafford on 11 December and 7 May respectively, with the away games on 30 April and at Chelsea on 18 December.

It could be a tough start to the season for Ferguson, with the Premier League kicking off just a month after the World Cup finishes, the Scot may be without several first team players, who will each be given 28 days off before starting pre-season training.

While Chelsea has the same issue, with even more players attending the World Cup than United, the London club’s opening fixtures are kind, with five winnable games before they travel to Manchester City in late September. By United’s first six fixtures include matches against Fulham, Liverpool and Everton.

United also faces a tough run-in if Ferguson’s side is to regain the Premier League trophy in 2010/11.  Starting at Liverpool on 5 March, United’s final 10 fixtures include games against Arsenal, Chelsea, Everton and Fulham before concluding with a final-day match at home to newly promoted Blackpool.

The Champions League, the draw of which does not take place until August, will also have an impact on United’s Premier League schedule. United lost a significant number of games following European fixtures last season. In 2010/11 United will face tough matches against Liverpool and Arsenal immediately after group stage fixtures before the New Year.

Since the Premier League demands a license to print a full fixture list you can get it from the official club mouthpiece, ManUtd.com, here.

The Champions League schedule for 2010/11 is available here.

Who has the easiest run-in?

It’s that period of the year Sir Alex Ferguson famously labeled ‘squeaky bum time’ – the run in to the Premier League dénouement that will ultimately decided this year’s title destination. One suspects that it’s Sir Alex’ favourite time too. While others wilt in the face of pressure, the Scot thrives on the intense Spring competition.

The leading contenders – United, Chelsea and Arsenal – face 13 games before the Premier League concludes in mid May. Just 39 points are now up for grabs in a season of unpredictability. Indeed, a points total of just low to mid 80s will probably take the title this season.

United faces successive trips to Aston Villa and then Everton in the next 10 days, with the Champions League tie in Milan to come a week today. In a demanding February fixture list, United also plays the midlands team in the Carling Cup final before the month is out.

In March United has key home games against both Liverpool and Chelsea – key fixtures that will go a long way towards determining the Premier League title. Then on 21 April Ferguson’s side faces a trip to Eastlands to face Roberto Mancini’s Manchester City for a fourth time this season.

But in truth aside from those five fixtures – Villa, Everton, Liverpool, Chelsea and City – Sir Alex will expect his side to take maximum points with a fully fit squad – Owen Hargreaves and John O’Shea excepted – now at his disposal.

Chelsea’s fixture list looks balanced, with trips to Spurs and Liverpool as the most obvious banana skins. Carlo Ancelotti’s team also plays home ties against City and Villa in a marginally easier run-in than United’s.

Meanwhile, Arsenal – already heavily beaten by United and Chelsea in the past fortnight – arguably has the easiest run-in of the leading contenders. Arsène Wenger’s side meets Liverpool at the Emirates this weekend, with trips to Spurs and a home tie against City the toughest remaining fixtures on paper.

Chelsea’s two point advantage and, on paper, slightly easier remaining fixtures makes Ancelotti’s side marginal favourites for the title come May. But there is nobody better than Ferguson at managing the run-in.

With the Scot’s key defenders all but fit and Wayne Rooney almost unstoppable, the 3 April fixture against Chelsea already looks like a title decider.

At least ten Manchester United games will be moved from their original times and dates before December after Sky and ESPN announced their initial covered fixtures. The list means that by the end of the 2009/10 season more than half of United’s season will have be moved for TV coverage. Once again this season’s fixtures will be randomly assigned designed to maximise viewings figures rather than the consideration of traveling supporters. See you all at Portsmouth away  for the inevitable Sunday 27 Dec 8pm fixture!

Fixture changes up to the end of December:

United get Blues in opening fixture

Ronaldo-less Manchester United will take on Birmingham City in the season 2009/10 opening fixture on August 15 at Old Trafford. Other notable pre-Christmas dates include a home match against Arsenal on August 29, the first derby of the season, at home to Manchester City, on September 19 and then Liverpool away on October 24. United finish the season with fixtures against Chelsea, Blackburn, City, Tottenham, Sunderland, with the final game of the season at home to Stoke on May 9. At first glance the fixture list appears even, although away ties at Liverpool in October and Chelsea in November both follow a Champions League match, which may not please Sir Alex Ferguson.

While we’d love to bring you the full fixture list, we can’t due to licensing restrictions. So you’d be better off looking here!