Football Manager 2012 is absolutely, totally and utterly brilliant. I can’t imagine that surprises you much, dear reader. Football Manager has been absolutely, totally and utterly brilliant since it was called Championship Manager, and there was a Mitre Magma on the cover. What is really such an extraordinary achievement is that they really do just keep making it better and better.

I’m writing this assuming you have a working knowledge of the Football Manager series. In case you don’t, as the name suggests it’s a football management simulator in which you take on and run a club as you see fit. You handle tactics, transfers, the media, keeping your players sweet, hiring and firing backroom staff and trying to stop the board from sacking you and hiring Steve McClaren as your replacement – the ultimate ignominy.

The thing is, they put one of these out every year. This means they ask us to part with our hard-earned £30 or so for what will inevitably be an incremental upgrade on the previous year. Without the demands of a large multiplayer audience (FM does have multiplayer, but it’s far from the predominant pull to the given the time investment required), the need to have the latest and greatest version is based more on the quality of the product than it is on being part of a community who all need to be playing the same version of a game.

Feature creep is a big part of annualised sports video game franchises – every year the publishers of these games need some bullet points to put on the back of the box. According to Sports Interactive (SI), which makes the game, you would need a pretty big box in this case, being as there are apparently more than 800 new features. There’s an in-depth new tutorial system, and having played the best part of a season attempting to do a better job than Steve Bruce of managing Sunderland, I can’t say I could pick those 800 features out of a line up, but I can say that I am having an amazingly good time.

If you want a detailed breakdown of what all the new features are, I’d recommend putting “what’s new in Football Manager 2012” into Google, but what really jumped out at me were three key changes. The first of these is the most visible – the presentation of information has been fairly radically overhauled. The higher the resolution the screen you are playing on, the more information you’re given on each screen. This is particularly useful on the player information screen – having an overview with attributes, positions, contract, training, form, all displayed at once is incredibly useful and saves many a click. Each section can be clicked into for more detailed information. And my goodness, there is an incredible amount of information.

I mentioned that I haven’t finished a season yet. Sadly, unlike when CM 97/98 came out (shout out to Ibrahima Bakayoko), I have a proper job, so I can’t just sit up all night playing Football Manager. It is not just my life that has changed beyond recognition, though – it’s the game too. It takes a long, long time to play through a season. The most time-consuming period, for me, was pre-season. There is such a lot to do. Finding new staff, somehow managing to bring in new players (the improvements to scouting are brilliant), getting used to the squad, and getting used to the new tactics interface – it all takes time, but there is no doubt that it is a very engaging process. Incidentally, I managed to sign Darron Gibson and immediately changed his nickname to “The G Bomb.” This was an important step toward success. I think SI might rate him a bit higher than we do. Seeing the words “click here to view the G Bomb’s profile keeps making me laugh like the idiot I am. 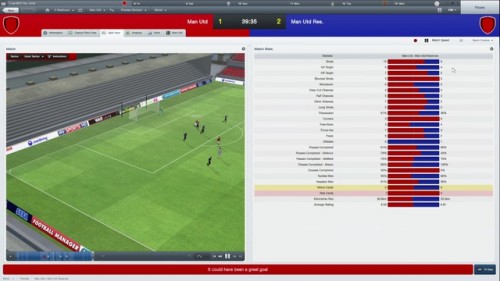 The second of the changes which has had the most impact on my experience of playing the game is the new “Tone” system for interacting with players, and the vastly improved team talks. You instantly see the effect of your overall team talk on a player’s body language, and can make adjustments by then providing a specific talk to your players by position, or as individuals. You can choose the tone you use, and varying this made it feel like you had a good deal more control. In previous years I have found that I essentially said I was pleased if players got 6.5-7.9 and delighted if they got 8 or better, which soon stopped having an impact. It now seems that you have a greater chance to actually influence the morale and performance of your team through the team talk which has made it into less of a chore than it felt before.

The third big marquee change which has had a noticeable impact on my experience is the vastly improved 3D match engine. I’m old enough to remember the stick figure match engine of the original Football Manager (which came on a tape, kids.) (A tape being like an MP3 player, but in the olden days). Some of my richest childhood gaming experiences came through those stick figures and whilst the actual figures and animations aren’t that really that far removed from their stick figure forebears, what is so impressive is how closely watching an FM simulated game looks like watching a simulated game of football, not in terms of graphical fidelity in a FIFA kind of a way, but in how well the representative figures move, and use the ball. They make the runs you hope they will, make passes which look like real passes and hit every kind of shot. The ball flies like a real ball should. It just feels like football. Sometimes all the players start running on the spot for a bit, and the frame rate wasn’t great on the battered old PC I’ve been playing on, but these are minor annoyances, and certainly not game breaking.

There is a new option – the Director’s camera which mostly uses the up in the stands angle, but cuts occasionally to a different view at key moments – behind the back for a direct free kick or penalty, for example. It’s a view which mostly works well, but does not seem to know the 180 degree rule. If you’ll allow me to quote Wikipedia – “In filmmaking, the 180° rule is a basic guideline that states that two characters (or other elements) in the same scene should always have the same left/right relationship to each other. If the camera passes over the imaginary axis connecting the two subjects, it is called crossing the line” This might seem like an overly technical complaint, but it actually makes a big difference to the experience of watching matches – it’s disorienting when this rule is ignored. 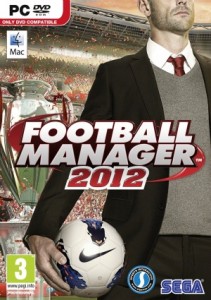 My only other significant gripe is one which has been a problem for a long while with the FM series – it takes a really long time, sometimes, for it to simulate in the background, all the games that you’re not involved in. This is a particular problem in international weeks, it seems. I was running one league with a small database (because of the aforementioned battered old PC) but the game really chugged in those spots. They have tried to moderate this problem by giving you the option to browse the standard menus and information whilst it processes matches in the background, but I still found there was a good deal of downtime.

So it’s not flawless, then, but Football Manager is one of the crowning achievements in the medium of computer games. There is a lot of debate in video game criticism about the real strengths of the medium – especially when it comes to providing a narrative experience, Football Manager allows you to create your own narrative – relationships with players, ups and downs, key games won or lost on the form of a star striker, or a poor offside decision. As a manager you have enormous influence, but not omnipotence. Which, of course, is very much like real football. You need patience, and some time on your hands and be prepared to sift through an enormous amount of information to get the best out of this game. If you do, though, it’s an incredibly rich, deep and rewarding experience and incremental update on last year or not, really fantastic value for money.

Football Manager 2012, developed by SI Games and published by SEGA, is available now.